Italian Ways: On and Off the Rails from Milan to Palermo (Hardcover) 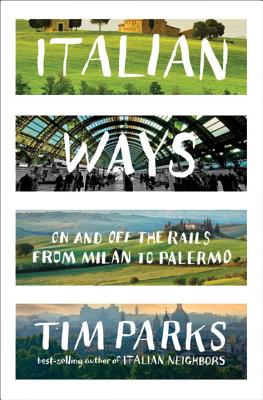 By Tim Parks
Unavailable, our apologies.
Out of Print

The best-selling author of Italian Neighbors returns with a wry and revealing portrait of Italian life—by riding its trains.

Tim Parks’s books on Italy have been hailed as "so vivid, so packed with delectable details, [they] serve as a more than decent substitute for the real thing" (Los Angeles Times Book Review). Now, in his first Italian travelogue in a decade, he delivers a charming and funny portrait of Italian ways by riding its trains from Verona to Milan, Rome to Palermo, and right down to the heel of Italy.


Parks begins as any traveler might: "A train is a train is a train, isn’t it?" But soon he turns his novelist’s eye to the details, and as he journeys through majestic Milano Centrale station or on the newest high-speed rail line, he delivers a uniquely insightful portrait of Italy. Through memorable encounters with ordinary Italians—conductors and ticket collectors, priests and prostitutes, scholars and lovers, gypsies and immigrants—Parks captures what makes Italian life distinctive: an obsession with speed but an acceptance of slower, older ways; a blind eye toward brutal architecture amid grand monuments; and an undying love of a good argument and the perfect cappuccino.

Italian Ways also explores how trains helped build Italy and how their development reflects Italians’ sense of themselves from Garibaldi to Mussolini to Berlusconi and beyond. Most of all, Italian Ways is an entertaining attempt to capture the essence of modern Italy. As Parks writes, "To see the country by train is to consider the crux of the essential Italian dilemma: Is Italy part of the modern world, or not?"

Tim Parks’s acclaimed books about Italy include Italian Ways, Italian Neighbors, and An Italian Education. He is a regular contributor to the New York Review of Books. He lives in Italy.

[S]o inviting you might find yourself tempted to give the experience a whirl and ride the Italian trains yourself, book in hand.
— Liesl Schillinger - New York Times Book Review

This is the best book I’ve ever read about Italy. Never have I encountered a more insightful and hilarious insider/outsider portrait of the country at the center of Western civilization. Tim Parks should be given a villa in Rome and the title of English ambassador.
— Sean Wilsey, author of Oh the Glory of It All

[A] treat equivalent to a ride on the Orient Express… Italian Ways is no Ferrari on rails but instead something much better: a slow train so thoughtfully appointed that one never thinks to look out the window or care about the destination.

There is no way that Italian Ways should work—but somehow it does work. How? Partly because the book is, as Tim Parks says, a search for the Italian character, which he evokes in dozens of gorgeously written scenes; but beyond that Parks is exploring the dynamic between tradition and innovation…Underneath everything, Parks is trying to come to a point of loving the world in all its confusion and frustration, and by book’s end he does, he does. Bravo.

— David Shields, author of How Literature Saved My Life

Tim Parks has written a book about Italian railways that is engrossing, entertaining, and wonderfully revealing about the country and its people. It makes perfect armchair travelling – a delight from beginning to end.
— David Lodge, author of Changing Places

Tim Parks has reinvented the narrative of the train journey with an epic voyage into the essence of Italy itself. With a novelist’s keen eye he mines absurdity and deep meaning from small, overlooked moments and gestures.
— Tom Vanderbilt, author of Traffic

[Parks is] a perfect guide—an outsider, but one with a deep familiarity and respect (plus a dash of exasperated skepticism)—to the country’s celebrated eccentricities. Parks has a charming voice and a novelist’s eye.
— Chloë Schama - Smithsonian

This is not a “railway book” in any conventional sense. It is sharp-eyed and sharp-tongued about the absurdities of ‘Italian ways.'
— John Lloyd - Financial Times

Fascinating [and] droll…. Parks [is] perhaps the most faithful foreign inamorato Italy has ever had.
— Andrea Lee - newyorker.com

Starred review. Delightful [and] hilarious…. Combining wonderfully evocative prose with a wry analysis, Parks provides local color while continually seeking hidden social meaning…. The result is a fascinating portrait of a society that seems rooted in place no matter how fast it goes.
— Publishers Weekly

Parks sees Italian culture with the more or less detached clarity of the outsider, but has spent enough time living in the place to feel justified in critiquing it from within…. Unmistakably an expression of love for his adopted country and its people.
— Mark O’Connell, author of The Millions

Presents a picture of Italy you won’t get from any tourist board… sympathetic and lively.
— Micahel Upchurch - Seattle Times