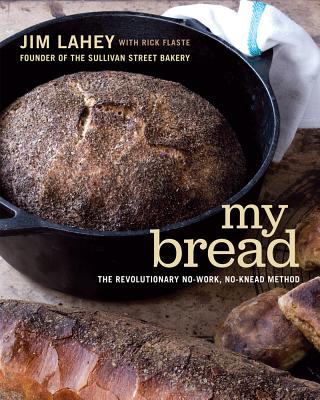 New York's own Sullivan Street Baker reveals his stunning recipe for bread that rises WITHOUT yeast. Since bread is back, for the glutenous among us.

When he wrote about Jim Lahey’s bread in the New York Times, Mark Bittman’s excitement was palpable: “The loaf is incredible, a fine-bakery quality, European-style boule that is produced more easily than by any other technique I’ve used, and it will blow your mind.” Here, thanks to Jim Lahey, New York’s premier baker, is a way to make bread at home that doesn’t rely on a fancy bread machine or complicated kneading techniques.

The secret to Jim Lahey’s bread is slow-rise fermentation. As Jim shows in My Bread, with step-by-step instructions followed by step-by-step pictures, the amount of labor you put in amounts to 5 minutes: mix water, flour, yeast, and salt, and then let time work its magic—no kneading necessary. The process couldn’t be more simple, or the results more inspiring. Here—finally—Jim Lahey gives us a cookbook that enables us to fit quality bread into our lives at home.

Jim Lahey has received two James Beard Awards and is the author of The Sullivan Street Bakery Cookbook, My Bread, and My Pizza. He lives in New York City with his wife and coauthor, Maya Joseph.

Rick Flaste served as the editor of the New York Times Dining Section at its inception, creating many of its acclaimed features. He has collaborated on numerous cookbooks and books.

Mr. Lahey's method is creative and smart…What makes Mr. Lahey's process revolutionary is the resulting combination of great crumb, lightness, incredible flavor—long fermentation gives you that—and an enviable, crackling crust, the feature of bread that most frequently separates amateurs from the pros…With just a little patience, you will be rewarded with the best no-work bread you have ever made.
— Mark Bittman - New York Times

Jim Lahey's My Bread expands on his no-knead, bread-in-a-pot method, a revolutionary development that allows even once-hopeless bakers like me to produce wonderful loaves of thick-crusted goodness. In the professional arena, Jim is the acknowledged master of bread, dough, and crust. Chefs, foodies, and food nerds flock to his bakery and to his pizza joint. He is to bread what the Dalai Lama is to Buddhism.

The secret to making a foolproof, nearly labor-free loaf that tastes as delicious as anything from a baker…[Lahey] is the most intuitive bread baker I have ever met.
— Jeffrey Steingarten - Vogue

Jim Lahey…opened the Sullivan St Bakery in 1994 selling breads that no one in the city had made before…Sullivan St became the name to look and ask for, and…became…the place to go for the incredibly airy, oil-brushed, lightly salted pizza Bianca, which is even better than that of the bakery in Rome's Campo de' Fiori.
— Corby Kummer - The Atlantic

It's bread above all that [Lahey] knows and loves…The man can do wonders with flour and water, massaged or not…He can do fluffy, crunchy, supple, dense. He can do pizza Bianca—man, oh man, can he do pizza Bianca—those salty squares of almost entirely naked crust.
— Frank Bruni - New York Times