The End of Empire: Attila the Hun and the Fall of Rome (Hardcover) 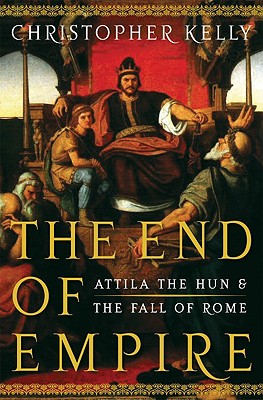 A bold new account of Attila the Hun as empire builder and political threat to Rome.

Conjuring up images of savagery and ferocity, Attila the Hun has become a byword for barbarianism. But, as the Romans of the fifth century knew, Attila did more than just terrorize villages on the edge of an empire. Drawing on original texts, this riveting narrative follows Attila and the Huns from the steppes of Kazakhstan to the opulent city of Constantinople and the Great Hungarian Plain, uncovering an unlikely marriage proposal, a long-standing relationship with a treacherously ambitious Roman general, and a thwarted Roman assassination plot. Attila the Hun and the Fall of Rome reframes the warrior king as a political strategist, capturing the story of how a small, but dedicated, opponent dealt a seemingly invincible empire defeats from which it would never recover.

Christopher Kelly, a professor of classics and ancient history and a Fellow and Director of studies in classics at Corpus Christi College at the University of Cambridge, where he received his PhD in classics. He lives in Cambridge, England, and Chicago, Illinois.