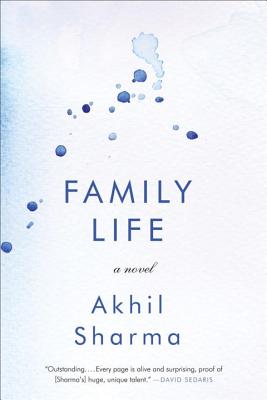 By Akhil Sharma
Unavailable, our apologies.
Sorry, We Can Not Obtain this Book at This Time

Growing up in Delhi in 1978, eight-year-old Ajay Mishra and his older brother Birju play cricket on the streets, eagerly waiting for the day they can join their father in America. America to the Mishras is, indeed, everything they could have imagined and more—until tragedy strikes. Young Ajay prays to a God he envisions as Superman, searching for direction amid the ruins of his family's new life. Heart-wrenching and darkly funny, Family Life is a universal story of a boy torn between duty and his own survival.

Akhil Sharma is the author of Family Life, a New York Times Best Book of the Year and the winner of the International DUBLIN Literary
Award and the Folio Prize. His writing has appeared in The New Yorker, The Atlantic, Best American Short Stories, and O. Henry Award Stories. A native of Delhi, he lives in New York City and teaches English at Rutgers University–Newark.

There's nothing like the pleasure of being devastated by a short novel. Like Jhumpa Lahiri, Akhil Sharma writes of the Indian immigrant experience with great empathy and a complete lack of sentimentality. Family Life is a dark and thrilling accomplishment by a wildly gifted writer.

Family Life will cut your heart to pieces but it will also make you rejoice. The language, the humor, the sophistication, the empathy, the insight—all signal a new kind of literature about families and the bonds with which they hold us tight.

Family Life is a terse, devastating account of growing up as a brilliant outsider in American culture. It is a nearly perfect novel.

Sharma is a rare master at charting the frailties and failures, the cruelties and rages, the altering moods and contradictions, whims and perversities of a tragic cast of characters. But this most unsentimental writer leaves the reader, finally and surprisingly, moved.
— Kiran Desai

An immigrant story like no other: funny and dark, unrelenting and above all, true.
— Nell Freudenberger

If you're the betting type, put money on it: National Book Award, Pulitzer, and the Book Critic Circle-thingy. Akhil's in the running for a hat trick.
— Amie Barrodale - Vice

A heartbreaking novel-from-life… [Sharma] takes after Hemingway, as each word of his brilliant novel feels deliberate, and each line is quietly moving.
— Maddie Crum - Huffington Post

An unsentimental, powerful portrait of immigrant life from an author who has been compared to Dostoyevsky.
— Angela Carone - San Diego Magazine

Surface simplicity and detachment are the hallmarks of this novel, but hidden within its small, unembellished container are great torrents of pity and grief. Sedulously scaled and crafted, it transforms the chaos of trauma into a glowing work of art.
— The Wall Street Journal

I lost all track of time while I was reading it, and felt by the end that I’d returned from a great and often harrowing journey… To my own surprise, I found myself renewed after reading it, and imbued with a feeling of hope.
— John Wray - Salon

With his subtly drawn point of view—recreating the child’s perceptions but with the controlling sensibility of an adult intelligence—Sharma gives us a fully imagined world, both hard and consoling.
— Jon Garelick - Boston Globe

If it’s tragedy, why do I remember the jokes with such fondness? Most reviews of Family Life have adequately conveyed its harrowing cruelties. But since this Slate/Whiting project is intended to steer readers toward second novels they may have overlooked, I’d like to point out that beyond the sadness, the novel contains a deep, nourishing reservoir of grim humor, thanks to Ajay’s deadpan and dead-eyed perceptions.
— Colson Whitehead - Slate.com