A Sad Affair: A Novel (Hardcover) 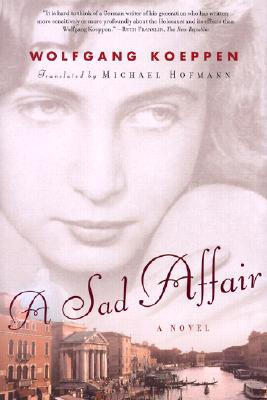 By Wolfgang Koeppen, Michael Hofmann (Translated by)
$23.95
This book is out of stock indefinitely, unable to order at this time.

A romantic roman a clef that tells the story of Sibylle, one of the greatest literary femmes fatales since Salomé.

Banned by the Nazis in 1936 for its frank sexual themes, Wolfgang Koeppen's first novel is at last appearing in English. A romance that anticipated Beat literature by nearly twenty years through its dizzying language and exploration of casual love, this is Koeppen's most hilarious work, one that evokes Mann's Tonio Kruger. Set during the heady, pre-World War II days of cabaret-era Germany, the novel centers around Sibylle—a stunning seductress who balances her love affairs with five men at once—and Friedrich, the callow, melancholic youth who obsessively pursues her.

In a stranger-than-fiction turn, Sibylle Scholoss, on whom the character of Sibylle is (very) loosely based, is now in her nineties and living in Manhattan. This publication enables us to celebrate not only the extraordinary renaissance of one of Germany's greatest twentieth-century writers but also the meteoric stage career of a German actress whose career was thwarted in its prime.

Wolfgang Koeppen's (1906-1996) The Hothouse was named one of the Los Angeles Times Best Books of the Year and a New York Times Notable Book.

[This is] sentimental traveling without sentimentality, rambling journeys on the edge of happiness, at their most beautiful, most staggering when the futility of desire turns into humor, into an urge to play.... Fantasy, swathed in spirituality.
— Berliner Tageblatt