Sailing the Wine-Dark Sea: Why the Greeks Matter (Hardcover) 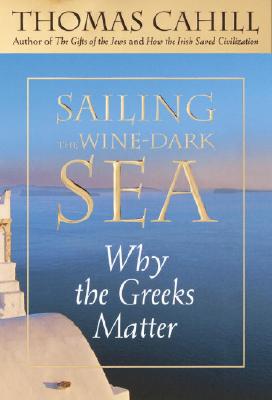 The Greeks invented everything from Western warfare to mystical prayer, from logic to statecraft. Many of their achievements, particularly in art and philosophy, are widely celebrated; other important innovations and accomplishments, however, are unknown or underappreciated. In Sailing the Wine-Dark Sea, Thomas Cahill explores the legacy, good and bad, of the ancient Greeks. From the origins of Greek culture in the migrations of armed Indo-European tribes into Attica and the Peloponnesian peninsula, to the formation of the city-states, to the birth of Western literature, poetry, drama, philosophy, art, and architecture, Cahill makes the distant past relevant to the present.

Greek society is one of the two primeval influences on the Western world: While the Jews gave us our value system, the Greeks set the foundation and framework for our intellectual lives. They are responsible for our vocabulary, and our entire system of categorization. They provided the intellectual tools we bring to bear on problems in philosophy, mathematics, medicine, physics, and the other sciences. Their modes of thinking, considered in classical times to be the pinnacle of human achievement, are largely responsible for the shape that the Christian religion took.

But, as Cahill points out, the Greeks left a less appealing bequest as well. They created Western militarism and, in making the warrior the ultimate ideal, perpetrated the assumption that only males could be entrusted with the duties of citizenship. The consequences of their exclusion of women from the political sphere and the social segregation of the sexes continue to reverberate today.

Full of surprising, often controversial insights, Sailing the Wine-Dark Sea is a remarkable intellectual adventure-conducted by th emost companionable guide imaginable. Cahill's knowledge of his sources is so intimate that he has made his own fresh translations of the Greek lyric ports for this volume.

THOMAS CAHILL is the author of the three previous volumes in the Hinges of History series: "How the Irish Saved Civilization," "The Gifts of the Jews," and "Desire of the Everlasting Hills." They have been bestsellers, not only in the United States but also in countries ranging from Italy to Brazil. Cahill was recently invited to address the U.S. Congress on the Judeo-Christian roots of moral responsibility in American politics. He and his wife, Susan, also a writer, divide their time between New York and Rome.

Praise for Desire of the Everlasting Hills

“Each of [Thomas Cahill’s] books offers moments of genuine insight into the workings of culture, literature, and the human heart.” —Commonweal

“A popularization, but in the best sense of the word. With grace, skill and erudition, he summarizes obtuse semantic and historical arguments, highlights the findings most relevant to lay readers and draws disparate material together in his portraits of Jesus, his mother, Mary, and the apostle Paul.” —Washington Post Book World

“A deft march through time and through theology in the making . . . [Cahill’s] own gift-giving is his ability to climb inside the scholarship and enliven it.”
—Philadelphia Inquirer


Praise for The Gifts of the Jews

“Cahill’s clearly voiced, jubilant song of praise to the gifts of the Jews is itself a gift—a splendid story, well told.” —Boston Globe


Praise for How the Irish Saved Civilization

“Charming and poetic . . . an entirely engaging, delectable voyage into the distant past, a small treasure.” —New York Times

“A shamelessly engaging, effortlessly scholarly, utterly refreshing history of the origins
of the Irish soul and its huge contribution to Western culture.” —Thomas Keneally

“When Cahill shows the splendid results of St. Patrick’s mission in Ireland—among them, the preservation and transmission of classical literature and the evangelization of Europe—he isn’t exaggerating. He’s rejoicing.” —The New Yorker