Planet of the Blind: A Memoir (Paperback) 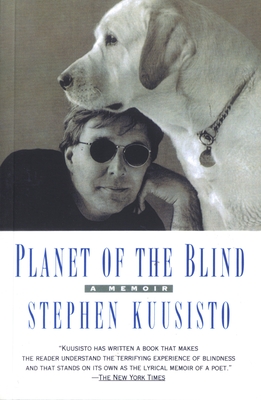 "The world is a surreal pageant," writes Stephen Kuusisto. "Ahead of me the shapes and colors suggest the sails of Tristan's ship or an elephant's ear floating in air, though in reality it is a middle-aged man in a London Fog rain coat which billows behind him in the April wind."

So begins Kuusisto's memoir, Planet of the Blind, a journey through the kaleidoscope geography of the partially-sighted, where everyday encounters become revelations, struggles, or simple triumphs. Not fully blind, not fully sighted, the author lives in what he describes as "the customs-house of the blind", a midway point between vision and blindness that makes possible his unique perception of the world. In this singular memoir, Kuusisto charts the years of a childhood spent behind bottle-lens glasses trying to pass as a normal boy, the depression that brought him from obesity to anorexia, the struggle through high school, college, first love, and sex. Ridiculed by his classmates, his parents in denial, here is the story of a man caught in a perilous world with no one to trust--until a devastating accident forces him to accept his own disability and place his confidence in the one relationship that can reconnect him to the world--the relationship with his guide dog, a golden Labrador retriever named Corky. With Corky at his side, Kuusisto is again awakened to his abilities, his voice as a writer and his own particular place in the world around him.

Written with all the emotional precision of poetry, Kuusisto's evocative memoir explores the painful irony of a visually sensitive individual--in love with reading, painting, and the everyday images of the natural world--faced with his gradual descent into blindness. Folded into his own experience is the rich folklore the phenomenon of blindness has inspired throughout history and legend.

Stephen Kuusisto is an acclaimed author, a poet, and a speaker. Blind since birth, he is the author of two memoirs, Planet of the Blind and Eavesdropping, as well as a collection of poems, Only Bread, Only Light. A Fulbright Scholar and a graduate of the Iowa Writers' Workshop, Kuusisto serves as the director of the Renée Crown University Honors Program at Syracuse University. His essays and poems have been featured in anthologies and literary magazines such as Harper's, The New York Times Magazine, The Parisian Review, and The Washington Post Magazine, and Kuusisto has made many television appearances, including features on BBC, A&E, Animal Planet, The Oprah Winfrey Show, and Dateline NBC.

"[Kuusisto] is a powerful writer with a musical ear for language and a gift for emotional candor. He has written a book that makes the reader understand the terrifying experience of blindness and that stands on its own as the lyrical memoir of a poet."
--Michiko Kakutani, The New York Times

"The sheer beauty of Kuusisto's writing creates a miraculous planet; a swirl of sensation and nuanced perception, ecstasy, terror and love.  Here a soul on a bicycle is propelled by pure desire.  And here we, in turn, are propelled toward a new vision."
--Andrea Barrett, author of Ship Fever