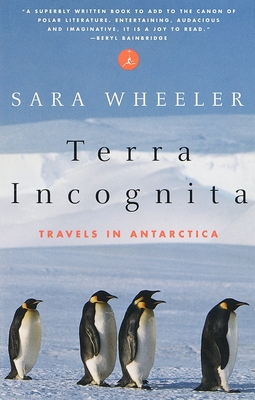 It is the coldest, windiest, driest place on earth, an icy desert of unearthly beauty and stubborn impenetrability. For centuries, Antarctica has captured the imagination of our greatest scientists and explorers, lingering in the spirit long after their return. Shackleton called it "the last great journey"; for Apsley Cherry-Garrard it was the worst journey in the world.

This is a book about the call of the wild and the response of the spirit to a country that exists perhaps most vividly in the mind. Sara Wheeler spent seven months in Antarctica, living with its scientists and dreamers. No book is more true to the spirit of that continent--beguiling, enchanted and vast beyond the furthest reaches of our imagination. Chosen by Beryl Bainbridge and John Major as one of the best books of the year, recommended by the editors of Entertainment Weekly and the Chicago Tribune, one of the Seattle Times's top ten travel books of the year, Terra Incognita is a classic of polar literature.

Sara Wheeler is the author of many books of biography and travel, including Access All Areas: Selected Writings 1990–2011 and Travels in a Thin Country: A Journey Through Chile. Terra Incognita: Travels in Antarctica was an international bestseller that The New York Times described as "gripping, emotional" and "compelling," and The Magnetic North: Notes from the Arctic Circle was chosen as Book of the Year by Michael Palin and Will Self, among others. Wheeler lives in London.

"A triumph . . . I cannot believe that anything better will ever be written about Antarctica." --Daily Telegraph

"Compelling . . . leaves the reader with a visceral understanding of the mysterious, even sublime power the poles have exerted
on the human imagination, and the desolate beauty that resides there amid the glaciers and icebergs and penguins."
--Michiko Kakutani, The New York Times

"I have read many accounts of polar exploration, but never one which so touchingly describes its emotional topography. . . . What she has done could not be done better." --Richard Eyre, The Independent