The Quick and the Dead (Vintage Contemporaries) (Paperback) 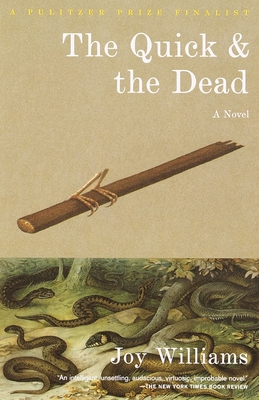 If you haven't read Joy Williams, you owe it to yourself to do so now. Her prose, though plain, is heartbreaking and luminous, her vision piercing. In The Quick & the Dead, she tells the story of three teenage girls with little in common but loss - but more than anything, as with almost all her work, the book is about the catastrophe of civilization, the rape of nature, and the grief that chokes the minds of those sensitive enough to understand what has happened, and continues to happen, to the world.

PULITZER PRIZE FINALIST • From one of our most heralded writers comes the “poetic, disturbing, yet very funny” (The Washington Post Book World) life-and-death adventures of three misfit teenagers in the American desert.

Alice, Corvus, and Annabel, each a motherless child, are an unlikely circle of friends. One filled with convictions, another with loss, the third with a worldly pragmatism, they traverse an air-conditioned landscape eccentric with signs and portents—from the preservation of the living dead in a nursing home to the presentation of the dead as living in a wildlife museum—accompanied by restless, confounded adults.

A father lusts after his handsome gardener even as he's haunted (literally) by his dead wife; a heartbroken dog runs afoul of an angry neighbor; a young stroke victim drifts westward, his luck running from worse to awful; a sickly musician for whom Alice develops an attraction is drawn instead toward darker imaginings and solutions; and an aging big-game hunter finds spiritual renewal through his infatuation with an eight-year-old—the formidable Emily Bliss Pickless.

With nature thoroughly routed and the ambiguities of existence on full display, life and death continue in directions both invisible and apparent. Gloriously funny and wonderfully serious, The Quick and the Dead limns the vagaries of love, the thirst for meaning, and the peculiar paths by which all creatures are led to their destiny.

A panorama of contemporary life and an endlessly surprising tour de force: penetrating and magical, ominous and comic, this is the most astonishing book yet in Joy Williams's illustrious career.

JOY WILLIAMS is the author of four novels—the most recent, The Quick and the Dead, was a runner-up for the Pulitzer Prize in 2001—and four collections of stories, as well as Ill Nature, a book of essays that was a finalist for the National Book Critics Circle Award. Among her many honors are the Rea Award for the Short Story and the Strauss Living Award from the American Academy of Arts and Letters. She was elected to the Academy in 2008. She lives in Tucson, Arizona, and Laramie, Wyoming.

“Joy Williams has produced a hard, sharp, comic novel about the off-kilter genius of adolescence—a work of maverick insight and rash and beautiful bursts of language.”—Don DeLillo

“Fierce, lively, and shocking…. Possesses a tooth and claw beauty as dangerous and brilliant as a cougar on the move.”—The Boston Globe

“So strange and so good ... so frightening and so comic ... every single element in it is undomesticated, from the characters to the clauses.”—Voice Literary Supplement