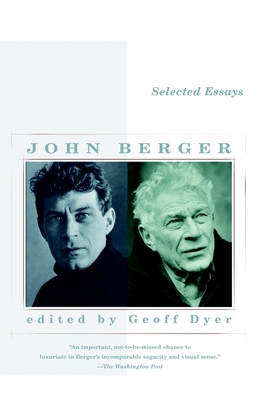 I love Berger for his curiosity and his generosity, for the wholeness of his vision (aesthetic, political, moral—the three are often one and the same). Reading him has been clarifying and comforting at a time when clarity and comfort have been hard to find.

The writing career of Booker Prize winner John Berger–poet, storyteller, playwright, and essayist–has yielded some of the most original and compelling examinations of art and life of the past half century. In this essential volume, Geoff Dyer has brought together a rich selection of many of Berger’s seminal essays.

Berger’s insights make it impossible to look at a painting, watch a film, or even visit a zoo in quite the same way again. The vast range of subjects he addresses, the lean beauty of his prose, and the keenness of his anger against injustice move us to view the world with a new lens of awareness. Whether he is discussing the singleminded intensity of Picasso’s Guernica, the parallel violence and alienation in the art of Francis Bacon and Walt Disney, or the enigmatic silence of his own mother, what binds these pieces throughout is the depth and fury of Berger’s passion, challenging us to participate, to protest, and above all, to see.

John Berger was born in London in 1926. He is well known for his novels and stories as well as for his works of nonfiction, including several volumes of art criticism. His first novel, A Painter of Our Time, was published in 1958, and since then his books have included Ways of Seeing, the fiction trilogy Into Their Labours, and the novel G., which won the Booker Prize in 1972. In 1962 he left Britain permanently, and lived in a small village in the French Alps. He died in 2017.

"An important, not-to-be-missed chance to luxuriate in Berger's incomparable sagacity and visual sense." —The Washington Post

“[Berger’s grace] is in his way with words, and the infinite meanings he finds in that common but extraordinary thing, noticing.” —The New York Times Book Review

“Tenderness, and an unflagging interest in the experience of being human, infuse his work.” —Los Angeles Times

"Berger is one of the greatest living writers in the English language." —Buffalo News