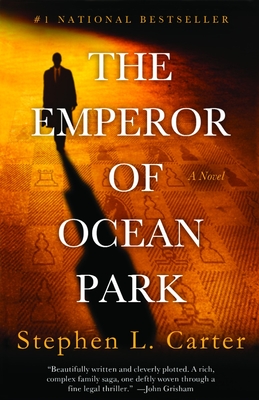 In his triumphant fictional debut, Stephen Carter combines a large-scale, riveting novel of suspense with the saga of a unique family. The Emperor of Ocean Park is set in two privileged worlds: the upper crust African American society of the Eastern seabord—families who summer at Martha’s Vineyard—and the inner circle of an Ivy League law school.

Talcott Garland is a successful law professor, devoted father, and husband of a beautiful and ambitious woman, whose future desires may threaten the family he holds so dear. When Talcott’s father, Judge Oliver Garland, a disgraced former Supreme Court nominee, is found dead under suspicioius circumstances, Talcott wonders if he may have been murdered. Guided by the elements of a mysterious puzzle that his father left, Talcott must risk his marriage, his career and even his life in his quest for justice. Superbly written and filled with memorable characters, The Emperor of Ocean Park is both a stunning literary achievement and a grand literary entertainment.

Stephen L. Carter is the William Nelson Cromwell Professor of Law at Yale University, where he has taught since 1982. He is the author of seven acclaimed nonfiction books, including The Culture of Disbelief and Civility. He lives with his wife and children near New Haven, Connecticut.

“Beautifully written and cleverly plotted. A rich, complex family saga, one deftly woven through a fine legal thriller.” --John Grisham“Rich, rewarding and compelling.... Transports readers into a different world and creates characters that resonate long after you’ve finished it.” --USA Today “Full of energy...high-spirited and fleet of foot.... This novel...lives on the page.... It’s not much of an exaggeration to think that in Stephen Carter the black upper class has found its Dreiser.” -- The New York Times Book Review “A remarkable debut novel.... A rare look into the world of wealthy and established black families.... One is at a loss to name another book...that has sought to convey, with such clarity, such depth of understanding or such cultural analysis, the uniqueness of this experience.” --Los Angeles Times Book Review“A thrilling entertainment.” --Newsday “Rich, rewarding and compelling.... Transports readers into a different world and creates characters that resonate long after you’ve finished it.” --USA Today “A delightful, sprawling, gracefully written, imaginative work, with sharply delineated characters who dwell in a fully realized narrative world.” --New York Review of Books “A dense, dark legal thriller.... Talcott’s clear-eyed observations of his peers, both white and black, give Emperor a social conscience that most books of its ilk lack.” --Time“Closely observed, often affecting.... Written with easy authority...nimble...satiric.... Persuasive.” --The New York Times“A thriller as heady as it is hefty.... Using...wry descriptions of place, power and privilege, Carter keeps attitude spinning.... With Emperor, Carter fills the gap between intrigue and intelligence.” --People “Carter writes powerfully about such virtues as love, faith and forgiveness...and offers a strong commentary on race as seen through the relationships between his characters.” --Philadelphia Inquirer“An admirable debut.... Mr. Carter’s storytelling skills are impressive.” --Wall Street Journal“The Emperor of Ocean Park is an outstanding work of fiction.... Masterfully developed.... A gripping story.” --Newark Sunday Star-Ledger“[Carter] has shed an unblinking eye on an area of race and culture conspicuously absent in popular fiction.” --Miami Herald“A light thriller for the beach; a wicked satire of academic politics; a stinging exposé of the judicial confirmation process; a trenchant analysis of racial progress in America.” --The Christian Science Monitor