Marigold and Rose: A Fiction (Hardcover) 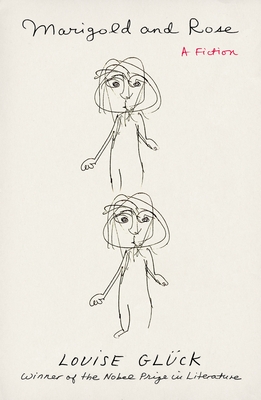 A deeply tender and thoughtful portrait imagining the inner life of newborn twins. Their world is not big but they are beginning to understand. And piece together their own meaning with what they know. One sister has discovered the joy of words and plans to write a book. An altogether beautiful story.

“Marigold was absorbed in her book; she had gotten as far as the V.” So begins Marigold and Rose, Louise Glück’s astonishing chronicle of the first year in the life of twin girls. Imagine a fairy tale that is also a multigenerational saga; a piece for two hands that is also a symphony; a poem that is also, in the spirit of Kafka’s The Metamorphosis, an incandescent act of autobiography.

Here are the elements you’d expect to find in a story of infant twins: Father and Mother, Grandmother and Other Grandmother, bath time and naptime—but more than that, Marigold and Rose is an investigation of the great mystery of language and of time itself, of what is and what has been and what will be. “Outside the playpen there were day and night. What did they add up to? Time was what they added up to. Rain arrived, then snow.” The twins learn to climb stairs, they regard each other like criminals through the bars of their cribs, they begin to speak. “It was evening. Rose was smiling placidly in the bathtub playing with the squirting elephant, which, according to Mother, represented patience, strength, loyalty and wisdom. How does she do it, Marigold thought, knowing what we know.”

Simultaneously sad and funny, and shot through with a sense of stoic wonder, this small miracle of a book, following thirteen books of poetry and two collections of essays, is unlike anything Glück has written, while at the same time it is inevitable, transcendent.

Louise Glück is the author of two collections of essays and over a dozen books of poems. Her many awards include the Nobel Prize in Literature, the National Humanities Medal, the Pulitzer Prize for The Wild Iris, the National Book Award for Faithful and Virtuous Night, the National Book Critics Circle Award for The Triumph of Achilles, the Bollingen Prize for Poetry, the Los Angeles Times Book Prize for Poems 1962–2012, and the Wallace Stevens Award from the Academy of American Poets. She teaches at Yale University and Stanford University and lives in Cambridge, Massachusetts.

“[Marigold and Rose] exists in a liminal zone between poetry and prose . . . Glück, in shrinking the world to the size of a pair of blankets inside cribs, manages to gently pack her narrative with feeling . . . It addresses, in larval and thus primal form, many of the concerns of Glück’s poetry. As she wrote in a poem titled ‘Nostos’: ‘We look at the world once, in childhood. The rest is memory.’” —Dwight Garner, The New York Times

“Alongside an exploration of the dichotomies that bind the girls together are meditations on many of Glück’s familiar preoccupations: halves and wholes, familial inheritance, time’s passage, the psychic power of words. The innocence of the girls’ observations, bearing an infant clarity, pare many of the book’s subjects down to a revealing frankness.” —The New Yorker

“Stunningly imaginative, incisive, sly, and hilarious . . . Concentrating the depth, rigor, and complexity of her poems into a delectably renegade, mordant, and bravura prose performance, Glück tracks the love and rivalry between these little philosophers . . . Succinctly and provocatively illuminates the vagaries of human consciousness, the bewitchment of language, and the mysterious assertion of the self.” —Donna Seaman, Booklist

"[Marigold and Rose] centers on twin sisters in their first year of life, unfolding like a fable as they slowly come to grips with time, safety, happiness, loss, and the vagaries of communication . . . Reed-slim, it teems with small wisdoms and lilts like a lullaby." —Marley Marius, Vogue