Last Summer in the City: A Novel (Hardcover) 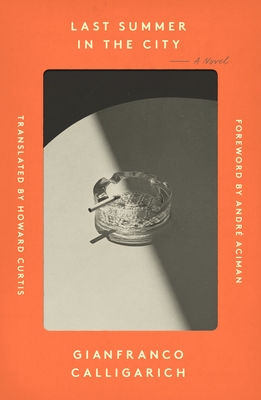 The first novel from award-winning author Gianfranco Calligarich to be published in English, Last Summer in the City is a witty and despairing classic of Italian literature. Biting, tragic, and endlessly quotable, this translated edition features an introductory appreciation from longtime fan New York Times bestselling author André Aciman.

In a city smothering under the summer sun and an overdose of la dolce vita, Leo Gazarra spends his time in an alcoholic haze, bouncing between run-down hotels and the homes of his rich and well-educated friends, without whom he would probably starve. At thirty, he’s still drifting: between jobs that mean nothing to him, between human relationships both ephemeral and frayed. Everyone he knows wants to graduate, get married, get rich—but not him. He has no ambitions whatsoever. Rather than toil and spin, isn’t it better to submit to the alienation of the Eternal City, Rome, sometimes a cruel and indifferent mistress, sometimes sweet and sublime? There can be no half measures with her, either she’s the love of your life or you have to
leave her.

First discovered by Natalia Ginzburg, Last Summer in the City is a forgotten classic of Italian literature, a great novel of a stature similar to that of The Great Gatsby or The Catcher in the Rye. Gianfranco Calligarich’s enduring masterpiece has drawn comparisons to such writers as Truman Capote, Ernest Hemingway, and Jonathan Franzen and is here made available in English for the first time.

Gianfranco Calligarich was born in Asmara, Eritrea, and grew up in Milan, then moved to Rome, where he worked as a journalist and screenwriter. He wrote many successful TV shows for Rai, the national public broadcasting company of Italy, and founded the Teatro XX Secolo in 1994. He is the author of many novels, including La malinconia dei Crusich, which won the Viareggio-Rèpaci Prize. Last Summer in the City is the first of his novels to be translated into English.

André Aciman is the New York Times bestselling author of Call Me By Your Name, Out of Egypt, Eight White Nights, False Papers, Alibis, Harvard Square, Enigma Variations, and Find Me. He's the editor of The Proust Project and teaches comparative literature at the Graduate Center of the City University of New York. He lives with his wife in Manhattan.

André Aciman is the New York Times bestselling author of Call Me By Your Name, Out of Egypt, Eight White Nights, False Papers, Alibis, Harvard Square, Enigma Variations, and Find Me. He's the editor of The Proust Project and teaches comparative literature at the Graduate Center of the City University of New York. He lives with his wife in Manhattan.

"Calligarich’s time capsule of love and existential drift in a lost Rome, translated into sparkling prose by Curtis, is ripe for a rediscovery."
—Anderson Tepper, The New York Times Book Review

"Calligarich’s rendering turns la dolce vita into something more akin to Camus’s L’Etranger in a contemporary-ish urban setting. Out of print for years, this welcome new translation is elegiac and heart-rending."
—Vogue (Best Books to Read This Summer 2021)

"A slim masterpiece . . . One of those delicious minor works, enmeshed in a particular place and a particular time, that only rarely escape the confines of a national literature and onto the commercial lists of varsity American publishers." —Max Norman, Los Angeles Review of Books

"[Calligarich's] Rome is a vibrant entity in his descriptions of the Spanish Steps, Piazza Navona, and the bustling market stalls of Campo de’ Fiori, while the sounds of summer—'voices in the trattorias on the square, the clatter of dishes, the melancholy sound of an out-of-tune trumpet'—lend a rich texture to this deeply haunting novel. Is there any place in society for those who refuse to color within the lines? This is a question that Leo struggles to answer. A marvel of a novel."
— Poornima Apte, Booklist (starred review)

"Scintillating . . . an Italian cult classic masterfully translated for the first time into English by the pro Howard Curtis . . . The novel feels as relevant today as it ever was."
—Jenny McPhee, Air Mail

"Evocative . . . Calligarich conjures Italy’s piazzas, parties, beaches, and bars with a mood reminiscent of A Movable Feast . . . the feeling that Leo is alone in the world is poignantly conveyed."
—Publishers Weekly

"Charming, decadent, and emotionally ruthless, Last Summer in the City is equal parts Fitzgerald and Antonioni, burrowing deep into the kind of unhappiness that can only be soothed by afternoon movies and very strong cocktails. It's wonderful to have this devastating gem at large in the world again."
—Andrew Martin, author of Cool for America

"The true quality of this novel is the way it enlightens, with a desperate clarity, a relationship between a man and a city--that is, between crowd and loneliness."
—Natalia Ginzburg