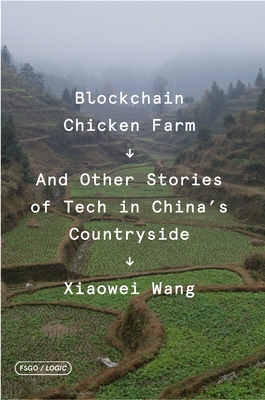 "A brilliant and empathetic guide to the far corners of global capitalism." --Jenny Odell, author of How to Do Nothing

From FSGO x Logic: stories about rural China, food, and tech that reveal new truths about the globalized world

In Blockchain Chicken Farm, the technologist and writer Xiaowei Wang explores the political and social entanglements of technology in rural China. Their discoveries force them to challenge the standard idea that rural culture and people are backward, conservative, and intolerant. Instead, they find that rural China has not only adapted to rapid globalization but has actually innovated the technology we all use today.

From pork farmers using AI to produce the perfect pig, to disruptive luxury counterfeits and the political intersections of e-commerce villages, Wang unravels the ties between globalization, technology, agriculture, and commerce in unprecedented fashion. Accompanied by humorous “Sinofuturist” recipes that frame meals as they transform under new technology, Blockchain Chicken Farm is an original and probing look into innovation, connectivity, and collaboration in the digitized rural world.

FSG Originals × Logic dissects the way technology functions in everyday lives. The titans of Silicon Valley, for all their utopian imaginings, never really had our best interests at heart: recent threats to democracy, truth, privacy, and safety, as a result of tech’s reckless pursuit of progress, have shown as much. We present an alternate story, one that delights in capturing technology in all its contradictions and innovation, across borders and socioeconomic divisions, from history through the future, beyond platitudes and PR hype, and past doom and gloom. Our collaboration features four brief but provocative forays into the tech industry’s many worlds, and aspires to incite fresh conversations about technology focused on nuanced and accessible explorations of the emerging tools that reorganize and redefine life today.

Xiaowei Wang is a technologist, a filmmaker, an artist, and a writer. The creative director at Logic magazine, their work encompasses community-based and public art projects, data visualization, technology, ecology, and education. Their projects have been finalists for the Index Design Awards and featured by The New York Times, the BBC, CNN, VICE, and elsewhere. They are working toward a PhD at UC Berkeley, where they are a part of the National Science Foundation’s Environment and Society: Data Science for the 21st Century Research Traineeship.

"Fascinating . . . Wang has a keen eye for the steampunk-like details of ancient rural areas now shot through with internet opportunity . . . a nuanced and thought-provoking account." --Clive Thompson, The New York Times Book Review

"You don’t have to be interested in blockchain to be taken in by this endlessly thought-provoking book . . . Wang is constantly pushing to dissolve binaries in search of a more nuanced conversation about progress, innovation and technology." --Allison Arieff, San Francisco Chronicle

"Wang helps readers trace the patterns emerging in the tapestry of our tech-infused world . . . [Wang] succeed[s] in their goal of reframing our understanding of technology as neither the cause of nor the solution to our problems but rather as a force reshaping the human experience in fundamental ways." --Arti Garg, Science

"Engaging travels through a Chinese countryside in which high technology meets the old ways . . . smart and well argued . . . Technology writing with flair looking to a future that’s fast upon us." --Kirkus (starred review)

"A unique and detailed survey of an underexplored aspect of Chinese innovation." --Publishers Weekly

"A brilliant and empathetic guide to the far corners of global capitalism, Xiaowei Wang dissolves so many boundaries in Blockchain Chicken Farm: between high tech and low tech, digital and physical, center and periphery, real and fake, mundane and magical, past and future. Wang is an expert at infiltrating systems that seem unfathomable and abstract, insistently grounding them in a spatial, personal reality. Yet this is not just a dystopian portrait of surveillance and profit. It is also a beautiful and hopeful argument -- for other possible futures, and for a human spirit that refuses to be quantified." --Jenny Odell, author of How to Do Nothing: Resisting the Attention Economy

"In this fascinating travelogue, Xiaowei Wang takes us deep into the most forward-thinking tech incubators in the world: the pig farms, rice paddies, and mountain strongholds of rural China. Blockchain Chicken Farm is a vital counterpoint to Silicon Valley’s fantasies of frictionless global domination, told with profound care and attention to the human-scale issues at play. This book will forever upend your conception of what “innovation” means." --Claire L. Evans, author of Broad Band: The Untold Story of the Women Who Made the Internet

"Xiaowei Wang is that rare sort of author who can make personal the often overwhelmingly-complex forces of capitalism, technology and globalization with both compassion and criticality. Moving effortlessly between a busy oyster market in China and a crowded BART ride in the United States, Wang reveals the interconnectedness of the things we create, consume and carry, showing how Silicon Valley, the U.S. heartland and rural China aren’t as far away as we think they are. Behind every Made in China label is the story of humanity. Blockchain Chicken Farm takes us there. It’s vital reading." --An Xiao Mina, author of Memes to Movements: How the World's Most Viral Media Is Changing Social Protest and Power

"Between detailed descriptions of rural and urban landscapes, Xiaowei Wang does a tremendous job of weaving together intricate details of China’s political and cultural history. Their deftness in writing about the inextricable link between industrial agriculture and digital technology offers a much-needed and well researched perspective. Blockchain Chicken Farm provides an incisive critique of the possible effects and future of machine learning, artificial intelligence, and automation that narrows, if not fully eliminates, the imaginary gap between farmlands and the concrete of the cityscape." --Dorothy R. Santos, writer, artist, educator