Two Sisters: A Father, His Daughters, and Their Journey into the Syrian Jihad (Paperback) 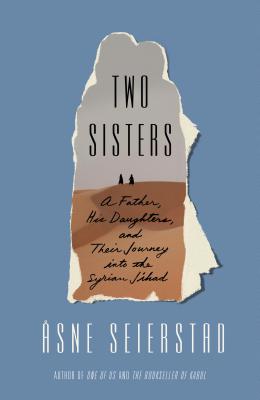 Two Sisters, by the international bestselling author Åsne Seierstad, tells the unforgettable story of a family divided by faith. Sadiq and Sara, Somali immigrants raising a family in Norway, one day discover that their teenage daughters, Leila and Ayan, have vanished—and are en route to Syria to aid the Islamic State. Seierstad’s riveting account traces the sisters’ journey from secular, social democratic Norway to the front lines of the war in Syria, and follows Sadiq’s harrowing attempt to find them.

Employing the same mastery of narrative suspense she brought to The Bookseller of Kabul and One of Us, Seierstad puts the problem of radicalization into painfully human terms, using instant messages and other primary sources to reconstruct a family’s crisis from the inside. Eventually, she takes us into the hellscape of the Syrian civil war, as Sadiq risks his life in pursuit of his daughters, refusing to let them disappear into the maelstrom—even after they marry ISIS fighters. Two Sisters is a relentless thriller and a feat of reporting with profound lessons about belief, extremism, and the meaning of devotion.

Åsne Seierstad is an award-winning Norwegian journalist and writer known for her work as a war correspondent. She is the author of The Bookseller of Kabul, One Hundred and One Days: A Baghdad Journal, and Angel of Grozny: Inside Chechnya. She lives in Oslo, Norway.

Seán Kinsella is from Dublin. He has translated a variety of books by Norwegian writers such as Kjell Askildsen, Tore Renberg, and Stig Sæterbakken. He lives in Norway.

"Two Sisters is a modern tragedy. And a universal one — the sisters, like any other young person, were seeking purpose and meaning." —Anthony Lloyd, The Times

"Meticulously documented . . . Complex and compelling . . . This is a tale fluently told, and a thriller as well, about two young girls who left Norway one evening and were last heard of in the city of Raqqa" —Kate Adie, Literary Review

"Remarkable . . . hauntingly written, this book is both a masterpiece and a masterclass in investigative journalism" —Christina Lamb, Sunday Times

"Two Sisters is a masterwork by the remarkable Asne Seierstad. Brilliantly conceived, scrupulously reported and beautifully written, this book is compulsive reading. In this real-life tale of two teenaged sisters who leave their comfortable lives in Norway to become the wives of ISIS terrorists in Syria, Seierstad fixes her lens on one of the most disturbing conundrums of our time—what leads ordinary people to become terrorists?" —Jon Lee Anderson, The New Yorker staff writer, and author of The Fall of Baghdad