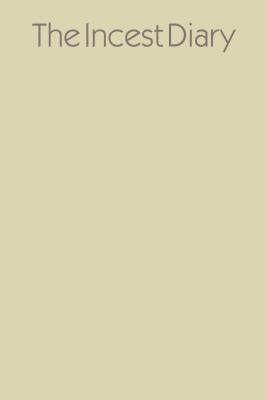 “In the fairy tales about father–daughter incest—‘The Girl Without Hands,’ ‘Thousand Furs,’ the original ‘Cinderella,’ ‘Donkey Skin,’ and the stories of Saint Dymphna, patron saint of incest survivors—the daughters are all as you would expect them to be: horrified by their father’s sexual advances. They do everything in their power to escape. But I didn’t. A child can’t escape. And later, when I could, it was too late.”

Throughout her childhood and adolescence, the anonymous author of The Incest Diary was raped by her father. Beneath a veneer of normal family life, she grew up in and around this all-encompassing secret. Her sexual relationship with her father lasted, off and on, into her twenties. It formed her world, and it formed her deepest fears and desires. Even after she broke away—even as she grew into an independent and adventurous young woman—she continued to seek out new versions of the violence, submission, and secrecy she had struggled to leave behind.

In this graphic and harrowing memoir, the author revisits her early traumas and their aftermath—not from a clinical distance, but from deep within—to explore the ways in which her father’s abuse shaped her, and still does. As a matter of psychic survival, she became both a sexual object and a detached observer, a dutiful daughter and the protector of a dirty secret. And then, years later, she made herself write it down.

With lyric concision, in vignettes of almost unbearable intensity, this writer tells a story that is shocking but that will ring true to many other survivors of abuse. It has never been faced so directly on the page.

“[The Incest Diary] is a controlled,exquisitely written book, it disturbs and disgusts, but it also mesmerizes and,at certain moments, charms in its quiet brutality.” —Amia Srinivasan, Harper’s Magazine

"Unforgettable . . . one of the most frank and cathartic depictions of child abuse ever written . . . An unflinching and staggeringly artful portrait of a shattered life . . . she has articulated an experience that for many victims remains unspeakable." --Publishers Weekly (starred review)

"Without a doubt [The Incest Diary] stands apart as a stark reminder of the human spirit's indomitability, and literature’s role as ballast" --Rich Smith, The Stranger

"Her writing is exceptionally clear-eyed and beautiful, though the content is appalling . . . The memoir shows the complex ripple effects of incest." --Zosia Bielski, The Globe and Mail (Toronto)