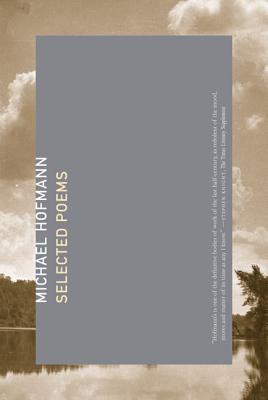 With five critically acclaimed collections—Nights in the Iron Hotel (1983), Acrimony (1986), K.S. in Lakeland: New and Selected Poems (1990), Corona, Corona (1993), and Approximately Nowhere (1999)—Michael Hofmann has established himself as one of the truly original poetic voices of our time. His poetry, both public and personal, expansive and intimate, looks in three directions—toward the Germany of his birth and toward his adopted homelands, England and America—and his perspective on all three is surprising, alarmed, and alarming. Influenced by Robert Lowell and John Berryman (both of whom he has edited), Hofmann nevertheless cannot be pigeonholed in any given style or movement. Hofmann may be better known, especially in America, for his acclaimed translations than for his own poetry, but this volume promises to introduce a broad new readership to a keenly intelligent, formally rigorous, emotionally unsparing poetry that feels entirely fresh.

“Hofmann's is one of the definitive bodies of work of the last half century, as redolent of the mood, mores and matter of its time as any I know.” —Stephen Knight, The Times Literary Supplement

“These penetrating and disquieting poems should cement Hofmann's reputation as more than just a prize-winning translator.” —Nichi Hodgson, New Statesman

“A Michael Hofmann poem is now a rare, strange, much valued item . . . One review a long time ago talked of Hofmann's ‘rainy day voice.' Yes, it is that, but it is a princely voice, too. Prince of nerves and manners, precise poet of desolations and furies--Hofmann's rainy day is as authentic and valuable as the weather we go out in.” —George Szirtes, The Guardian

“Easily among the best and most adventurous poets of his generation.” —Dennis O'Driscoll, Thumbscrew

“[Hofmann's] poem-biographies of Crassus and Marvin Gaye are true originals, in line of descent from his master, Robert Lowell, and the . . . recent work indicates, hearteningly, a poet unafraid of change or chance.” —Sean O'Brien, The Sunday Times (London)

“For anyone who remembers the poems of Michael Hofmann making their first appearances in magazines in the early 1980s, his has been one of the defining voices of the past two decades . . . It is wonderful to be reminded by this Selected of just how good, how original a poet Hofmann has always been--and to feel all over again the surprise and pleasure that new readers will feel, when they discover his wit and effrontery.” —PBS Bulletin, Special Commendation