A Sport and a Pastime: A Novel (Picador Modern Classics) (Paperback) 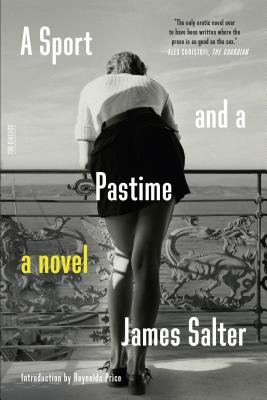 For luminous, masterful, unabashedly beautiful writing, behold James Salter. I read this book, and then I read it again. And again. And again. Each time it yielded something new—to quote the novel, “like memorizing the reflections of a diamond. The slightest movement and an entirely new brilliance appears.” The premise is simple: a handsome young American and his girlfriend drive around provincial France and make love. But no one writes sex like Salter—it’s primordial and transcendent and awkward and gorgeous and scary and sad. Think Hemingway with a heart.

"As nearly perfect as any American fiction I know," is how Reynolds Price (The New York Times) described this classic that has been a favorite of readers, both here and in Europe, for almost forty years. Set in provincial France in the 1960s, James Salter's A Sport and a Pastime is the intensely carnal story—part shocking reality, part feverish dream —of a love affair between a footloose Yale dropout and a young French girl. There is the seen and the unseen—and pages that burn with a rare intensity.

James Salter was the celebrated author of six novels (The Hunters, 1957; The Arm of Flesh, 1961; A Sport and a Pastime, 1967; Light Years, 1975; Solo Faces, 1979; and All That Is, 2013) and three books of stories (Dusk and Other Stories, 1988; Last Night, 2005; and Collected Stories, 2013), as well a memoir, Burning the Days (1997). He also had a successful Hollywood career, most notably as the screenwriter of Downhill Racer (1969). Born in New Jersey in 1926 and raised in New York City, he attended West Point during World War II and served as an officer and a fighter pilot in the U.S. Air Force from 1945 to 1957. He drew on his combat experiences in Korea for his first two novels, though it was not until the controversial but now-classic A Sport and a Pastime that he considered that he had come close to measuring up to his own standards. He was a recipient of the 1989 PEN/Faulkner Award and the 2012 PEN/Malamud Award. He died in Sag Harbor, New York, in 2015.