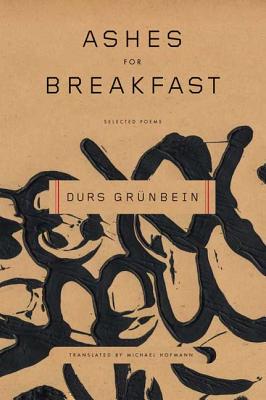 Born in Dresden in 1962, Durs Grünbein is the most significant and successful poet to emerge from the former East Germany, a place where, he wrote, "the best refuge was a closed mouth." In unsettling, often funny, sometimes savage lines whose vivid images reflect his deep love for and connection with the visual arts, Grunbein is reinventing German poetry and taking on the most pressing moral concerns of his generation. Brilliantly edited and translated by the English poet Michael Hofmann, Ashes for Breakfast expertly introduces Germany's most highly acclaimed contemporary poet to American readers.

Durs Grünbein is the author of eight previous volumes of poetry. His work has been awarded many major German literary prizes, including the highest, the Georg-Büchner-Preis, and the 2004 Friedrich-Nietzsche-Preis. He has lived in Berlin since 1985.

“Ashes for Breakfast is a brilliantly layered book [that] never becomes repetitive thanks to its almost organic sensibility . . . Grünbein's poems read as if the forces of history pressing in on the present drove them into this world.” —Melanie Rehak, The New York Times Book Review

“Intelligently translated . . . Despite the portentous and ubiquitous death knells sounded by many cultural critics, poetry is doing just fine, and for anyone in need of evidence, the work of Durs Grünbein should suffice . . . Grünbein is a vital new voice in the world of poetry . . . Like Joseph Brodsky, to whom he is often compared, he is a serious and focused poet whose work has a depth that deserves our attention. If given the chance, this momentous volume will offer many pleasures.” —David Hellman, San Francisco Chronicle

“Grünbein is a truly cosmopolitan poet . . . [He is] creating poetry which, however subtly, participates in and facilitates Germany's sustained attempts of reconfiguring and redefining itself in post-Cold War Europe.” —Michael Eskin, The Times Literary Supplement

“[Grünbein's] poems have a nonchalant grace, and shine against their setting of Stalinoid concrete, drabness and dreck. What makes them especially appealing are their volatile shifts of perspective, a sardonic wit and the way they seem to limn out a whole series of potential directions . . . The unhoused quality of these poems has found as permanent and well-constructed a home in English as anyone . . . could wish.” —James McKendrick, The Times Literary Supplement

“Younger by five to ten years than most of the poets once gathered loosely around the former Prenzlauer Berg 'scene' in East Berlin, Durs Grünbein . . . has emerged as one of the most visible, prolific, and intellectually serious poets of that generation. Unlike some of his peers, who seem to have become disoriented by reunification--e.g., Uwe Kolbe and Bert Papenfuß-Gorek--Grünbein has consistently worked to develop his own idiom and poetic identity.” —Neil H. Donahue, World Literature Today

“Durs Grünbein is one of the most intelligent poets writing in German today. His subject is nothing less than 'this life, so useless, so rich.' It is wonderful to have his selected poems in Michael Hofmann's note-perfect translation.” —John Ashbery

“Grünbein is a highly original poet, an heir to the riches of German and European Modernism. What's striking in this poetry is a hard, almost cynical tone which turns out to be just a lid on a jar containing many substances.” —Adam Zagajewski

“Born in Dresden in 1962, when the city was under East Germany's Communist rule, Grünbein has established himself as the leading poetic voice of unified Germany after the fall of the Wall in 1990. A gifted poet and clever scavenger of various literary traditions, he picks through the linguistic debris of European culture to mold his findings into well-metered and often deeply captivating verse. Packed into this selection, which has been culled from collections published between 1988 and 1999, are electrifying insights into Germany's effort to understand its role in the world today. Grünbein's predominantly unrhymed, formal poems run on the alternating currents of present-day Germany's giddiness at having no greater responsibilities than any other nation and the country's equally overwhelming grief at having so horribly squandered its potential for prominence. With wit and psychological acumen, Grünbein's poems at their best transform the specificity of this peculiarly German dilemma into a general, human concern . . . Hofmann . . . locates suitable equivalents to Grünbein's virtuoso act of laying down multiple verbal tracks in the briefest lines to startling effect.” —Library Journal