The Survival of the Bark Canoe (Paperback) 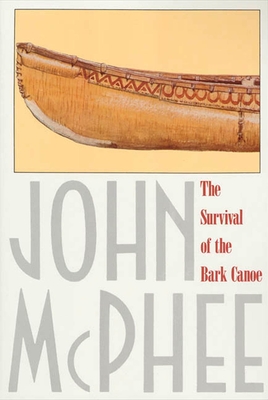 In Greenville, New Hampshire, a small town in the southern part of the state, Henri Vaillancourt makes birch-bark canoes in the same manner and with the same tools that the Indians used. The Survival of the Bark Canoe is the story of this ancient craft and of a 150-mile trip through the Maine woods in those graceful survivors of a prehistoric technology. It is a book squarely in the tradition of one written by the first tourist in these woods, Henry David Thoreau, whose The Maine Woods recounts similar journeys in similar vessel. As McPhee describes the expedition he made with Vaillancourt, he also traces the evolution of the bark canoe, from its beginnings through the development of the huge canoes used by the fur traders of the Canadian North Woods, where the bark canoe played the key role in opening up the wilderness. He discusses as well the differing types of bark canoes, whose construction varied from tribe to tribe, according to custom and available materials. In a style as pure and as effortless as the waters of Maine and the glide of a canoe, John McPhee has written one of his most fascinating books, one in which his talents as a journalist are on brilliant display.

“In his own beautifully crafted work, McPhee treats both man and boat with all the respect and admiration their precarious presence commands.” —Time

“Every white water and wilderness buff should rise to it like a trout, but as all followers of Mr. McPhee's work would expect, its appeal and value cannot be so narrowly limited; it's a lively chronicle, rich in character study and observations.” —The Wall Street Journal