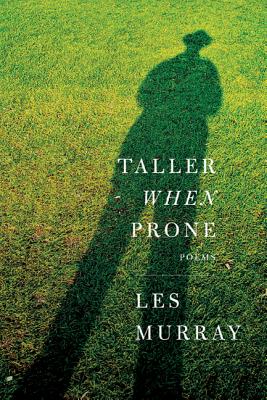 By Les Murray
Unavailable, our apologies.
Out of Print

Taller When Prone is Les Murray's first volume of new poems since The Biplane Houses, published five years ago. These poems combine a mastery of form with a matchless ear for the Australian vernacular. Many evoke rural life here and abroad—its rhythms and rituals, the natural world, the landscape and the people who have shaped it. There are traveler's tales, elegies, meditative fragments, and satirical sketches. Above all, there is Murray's astonishing versatility, on display here at its exhilarating best.

We were at dinner in Soho
and the couple at the next table
rose to go. The woman paused to say
to me: I just wanted you to know
I have got all your cook books
and I swear by them!

I managed
to answer her: Ma'am
they've done you nothing but good!
which was perhaps immodest
of whoever I am.

The widely acclaimed Australian poet Les Murray lives and writes on a farm on the north coast of New South Wales, where he was born in 1938. His books include Dog Fox Field, Translations from the Natural World, Subhuman Redneck Poems, Fredy Neptune: A Novel in Verse, Learning Human: Selected Poems, Conscious and Verbal, and Poems the Size of Photographs. In 1998, Murray was awarded the Gold Medal for Poetry presented by Queen Elizabeth II.

“Equipped with a fierce moral vision and a sensuous musicality . . . [Murray] writes subtly about postcolonialism, urban sprawl and poverty and, in his most intimate poems, reminds us of the power of literature to transubstantiate grievance into insight. (His admirers have argued he ought to be considered for a Nobel.) But he is equally capable of writing emotionally simplistic and strangely soured poems in which the enraged adolescent emerges all but unmediated. This mercurial doubleness can make his work hard to categorize or describe: this is a mind at once revolutionary and reactionary. Or maybe just a poet who's willing to show more id than most.” —Meghan O'Rourke, The New York Times Book Review

“Mr. Murray's verse wears, from the waist up, a cosmopolitan, Philip Larkin-like wit. From the waist down, it dresses in worn dungarees and mud-caked boots. There's a sense of rural astringency . . . Mr. Murray employs both rhyme and meter, but variably--he's like a man walking a large, randy, omnivorous dog on a retractable leash. He can cinch his words tightly in an instant; he owns one of poetry's most sensitive verbal choke collars. ” —Dwight Garner, The New York Times