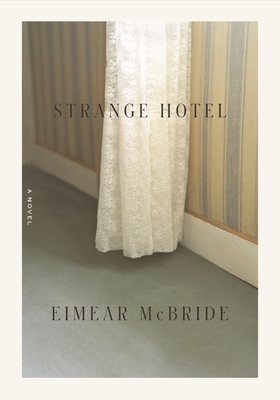 From Eimear McBride, author of the award-winning A Girl Is a Half-formed Thing, comes the beguiling travelogue of a woman in exile: from her past, her ghosts, and herself.

A nameless woman enters a hotel room. She’s been here once before. In the years since, the room hasn’t changed, but she has. Forever caught between check-in and check-out, she will go on to occupy other hotel rooms. From Avignon to Oslo, Auckland to Austin, each is as anonymous as the last but bound by rules of her choosing. There, amid the detritus of her travels, the matchbooks, cigarettes, keys and room-service wine, she negotiates with her memories, with the men she sometimes meets, with the clichés invented to aggravate middle-aged women, with those she has lost or left behind--and with what it might mean to return home.

Urgent and immersive, filled with black humour and desire, McBride’s Strange Hotel is a novel of enduring emotional force.

Eimear McBride is the author of the novels The Lesser Bohemians (winner of the James Tait Black Memorial Prize) and A Girl Is a Half-formed Thing (winner of the Bailey's Women's Prize for Fiction, the Kerry Group Irish Novel of the Year Award, the Goldsmiths Prize, and others). She was the inaugural creative fellow at the Beckett Research Centre, University of Reading, and occasionally writes for The Guardian, the Times Literary Supplement, New Statesman, and The Irish Times.

“Ms. McBride arrived as an indie-press phenom in 2013 with “A Girl Is a Half-Formed Thing,” a jagged, uncompromising stream-of-consciousness novel that she shopped for nine years before finding a publisher . . . The baroque tangle of the main character’s ‘inverted chats,’ as she dubs her monologues, is more interesting than yet another plainspoken confrontation with repressed trauma. Ms. McBride’s brilliance lies in her arrangements of the glorious garble of language.”
--Sam Sacks, The Wall Street Journal

“There is a constant traffic between the impulses and exigencies of the body and the looping digressions and brutal hairpin bends of the mind . . . These bare bones make Strange Hotel sound as though it is a meditation on romantic loss and a sketch of the accommodations one makes in its absence. In a way it is; but it also delves far more deeply into the instability of identity.”
--Alex Clark, The Guardian

“McBride writes with soul-stirringly inventive language and an immediate, stream-of-consciousness style that's all her own . . . This begs to be savored, and reread.”
--Annie Bostrom, Booklist

“There are numerous sparks of singularly brilliant prose.”
--Kirkus

"McBride’s challenging new novel extends the stream-of-consciousness technique she honed in her celebrated debut, A Girl Is a Half-Formed Thing." --The New York Times (New and Noteworthy)

“No writer currently working excites me more than Eimear McBride—in her writing of the body, in her radical reimagining of the sentence, in her invention of new intimacies. Nothing else feels so fresh, so radically new. Strange Hotel challenges and expands my sense of what art can do. Each of McBride’s novels feels like an event—not just in English-language literature but in the English language itself. ”
—Garth Greenwell, author of Cleanness and What Belongs to You

“In Strange Hotel, a nameless woman’s voyage through a string of hotel rooms gradually reveals an inner world of striking tumult and depth, as her meditations draw her, and us, deeper into the unsettled tides of her own past. Eimear McBride has created a powerfully hypnotic novel of consciousness, one that traces the intricacies of thought and memory in prose so thrilling, so dagger-sharp, it makes the heart race.”
—Laura van den Berg, author of The Third Hotel

“A load-bearing beam of a book carrying a whole mansion (or possibly hotel) of meaning. It gives you the almost eerie sense of reading a future classic, but is also a novel reaching back into many byways and private roads of world literature.”
—Sebastian Barry, The Guardian

Praise for A Girl Is a Half-formed Thing

“Blazingly daring ... [McBride’s] prose is a visceral throb ... [Her] language plunges us into the center of experiences that are often raw, unpleasant, frightening, but also vital.”
—James Wood, The New Yorker

“[A Girl Is a Half-formed Thing] is, in all respects, a heresy—which is to say, Lord above, it’s a future classic.”
—Joshua Cohen, The New York Times Book Review

Praise for The Lesser Bohemians

“The Lesser Bohemians is a full-on sensory experience—and another superlative achievement.”
—The Wall Street Journal