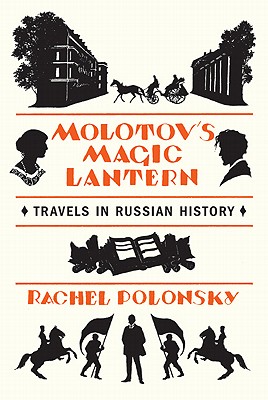 By Rachel Polonsky
Unavailable, our apologies.
Sorry, We Can Not Obtain this Book at This Time

When the British journalist Rachel Polonsky moves to Moscow, she discovers an apartment on Romanov Street that was once home to the Soviet elite. One of the most infamous neighbors was the ruthless apparatchik Vyacheslav Molotov, a henchman for Stalin who was a participant in the collectivizations and the Great Purge—and also an ardent bibliophile. In what was formerly Molotov’s apartment, Polonsky uncovers an extensive library and an old magic lantern—two things that lead her on an extraordinary journey throughout Russia and ultimately renew her vision of the country and its people.

In Molotov’s Magic Lantern, Polonsky visits the haunted cities and vivid landscapes of the books from Molotov’s library: works by Chekhov, Dostoevsky, Pushkin, Akhmatova, and others, some of whom were sent to the Gulag by the very man who collected their books. With exceptional insight and beautiful prose, Polonsky writes about the longings and aspirations of these Russian writers and others in the course of her travels from the Arctic to Siberia and from the forests around Moscow to the vast steppes. A singular homage to Russian history and culture, Molotov’s Magic Lantern evokes the spirit of the great artists and the haunted past of a country ravaged by war, famine, and totalitarianism.

Rachel Polonsky has written for "Prospect," "The Guardian," "The Times Literary Supplement," and "The Spectator," among other publications. She is the author of "English Literature and the Russian Aesthetic Renaissance "and lives in Cambridge, England, with her family.

“A modern classic.” —The Economist “Cogently descriptive, empathic, plucky, and acerbic, Polonsky begins with a tour of Moscow’s grim landmarks of the Stalin era, then ventures out into the countryside, excavating the tragic and heroic stories of writers and scientists who suffered banishment and worse, many the victims of Molotov’s industrious murderousness . . . Polonsky is so steeped in Russian history and literature that everywhere she goes, her inner magic lantern projects the past onto the present, the imagined onto the real, and what we see is an illuminated land of immense brutality and beauty, suffering and spirit.” —Donna Seaman, Booklist

“The result is an eccentric work, daring in conception, peculiar in construction, that incorporates all Polonsky’s teeming scholarly knowledge of Russia and the Russian people . . . In the course of her travels, Polonsky visits monasteries, dachas, sanatoriums and bath houses. Her chapter on Siberia in particular offers a meticulous reportage tinged with poetry, in which almost every page radiates gem-like images and an impressive literary craft . . . A magnificent achievement, in which Russia emerges as less a nation than a marvellous region of the mind.” —Ian Thomson, The Irish Times

“It’s a gem . . . [Polonsky] has achieved the unimaginable: a serious non-fiction account of Russia, which is as wide-ranging as it is entertaining . . . This is a wonderful account of a changing Russia . . . If you have always wanted to read an accessible, profound and original history of modern Russia, this is the book for you. It’s a challenging and demanding read but one that is hugely rewarding.” —Viv Groskop, Sunday Express

“As promising and enticing as a novel . . . An unexpectedly delightful literary travelogue . . . Polonsky is not so much a wanderer as a meanderer of the mind . . . And Molotov’s Magic Lantern is not a piece of history, nor of literary criticism, but a pocket torch shone into the nooks and crannies between the two.” —Wendell Steavenson, The Sunday Times

“Polonsky's detail-studded hybrid of travelogue, biography and political and cultural history is dense and scholarly, and dares to lack a dominant propulsive narrative . . . Rather, it beautifully competes with Russia’s endemic cultural amnesia to refract a terrifying national legacy through a bloodied sequence of endlessly shimmering stories, over which the figure of Putin still resolutely lies.” —Metro

“As promising and enticing as a novel . . . An unexpectedly delightful literary travelogue . . . Polonsky is not so much a wanderer as a meanderer of the mind. And Molotov’s Magic Lantern is not a piece of history, nor of literary criticism, but a pocket torch shone into the nooks and crannies between the two.” —The Sunday Times

“Polonsky's detail-studded hybrid of travelogue, biography and political and cultural history is dense and scholarly, and dares to lack a dominant propulsive narrative. Rather, it beautifully competes with Russia’s endemic cultural amnesia to refract a terrifying national legacy through a bloodied sequence of endlessly shimmering stories, over which the figure of Putin still resolutely lies.” — Metro

“[An] elegant book . . . This is a many-layered portrait in which the strands of Russia past and present, town and countryside, real and intellectual, are interwoven with skill and . . . erudition.” —Mary Dejevsky, The Independent

“Fascinating skatulochka—jewellery box—of Russian history . . . Polonsky’s description of the far north of Russia made me long to visit, with its ‘other-wordly’ landscape. [Polonsky] achieves a more profound understanding of Putin’s Russia than many other foreign observers.” —Charlotte Hobson, The Daily Telegraph

“Polonsky weaves an extraordinary web of connections between people, places and books. Her own work seems to belong to no known genre. It is neither political history, nor literary criticism, nor travelogue reportage; yet it combines some of the best features of all three, illuminating aspects of Russian cultural life . . . What is utterly fresh about this book is the personal engagement with the material, the capturing of place, mood and tone . . . The command of detail is absolutely masterly.” —The Sunday Telegraph

“Perceptive and erudite . . . [Polonsky] has produced a spectacular and enjoyable display of intellectual fireworks for the general reader . . . Ms Polonsky wears her considerable learning lightly . . . She has a knack for putting herself into other people's shoes with empathy and skill . . . The contempt she feels for the greed, filth and viciousness that she encounters is all the more compelling for being understated. Her sympathy and affection for the finest bits of Russia's past and present shine through . . . The reader catches only fleeting glimpses of Ms Polonsky herself. That contrasts pleasingly with the self-centredness that is present in so much other Western writing about Russia. As her book shows, the author has grit, charm and style—and a gift for traveller’s tales.” —The Economist

“Everywhere on this journey, Polonsky shows great curiosity about the web of personality and history, and the connections between power and literature that form Russian history and society today, her erudition is always lightly-worn . . . I was gripped by this book—a delicious celebration of Russia, old and modern, from Pushkin to Putin, not only a guide to obscure places but also a meanderingly whimsical map of the soul and daily life of Russia, a luminous, charming and fascinating masterclass on literature, power, tragedy and death.” —Simon Sebag Montefiore, Evening Standard

“[Polonsky’s] book is as sensitive to literature and history as it is to the merely exotic, and she combines impressive scholarship, the work of years, with an admirably languid delicacy of touch . . . Polonsky’s imagination is mercurial, and it is for that, not Stalin’s grisly comrade, that the book delights . . . Anyone who loves Russia will be entertained, and some who do not may be tempted to start an adventure of their own . . . It is as delicate and enriching as a Russian poem, and it will certainly make a new generation of visitors to Russia think more colourfully about Europe's closest, endlessly surprising, other.” —Catherine Merridale, Literary Review