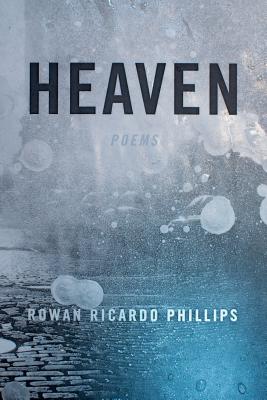 By Rowan Ricardo Phillips
Unavailable, our apologies.
Hard to Find

"Who the hell's heaven is this?" Rowan Ricardo Phillips offers many answers, and none at all, in Heaven, the piercing and revelatory encore to his award-winning debut, The Ground. Swerving elegantly from humor to heartbreak, from Colorado to Florida, from Dante's Paradise to Homer's Iliad, from knowledge to ignorance to awe, Phillips turns his gaze upward and outward, probing and upending notions of the beyond.

"Feeling, real feeling / with all its faulty / Architecture, is / Beyond a god's touch"—but it does not elude Phillips. Meditating on feverish boyhood, on two paintings by Chuck Close, on Shakespeare's Measure for Measure, on a dead rooster by the side of the road in Ohio, on an elk grazing outside his window, his language remains eternally intoxicating, full of play, pathos, and surprise.

"The end," he writes, "like / All I've ever told you, is uncertain." Or, elsewhere: "The only way then to know a truth / Is to squint in its direction and poke." Phillips—who received a 2013 Whiting Writers' Award as well as the PEN/Joyce Osterweil Award—may not be certain, but as he squints and pokes in the direction of truth, his power of perception and elegance of expression create a place where beauty and truth come together and drift apart like a planet orbiting its star. The result is a book whose lush and wounding beauty will leave its mark on readers long after they've turned the last page.

“In Heaven, Rowan Ricardo Phillips explores what heaven is - or might be. As with Phillips's first collection, The Ground which won the 2013 Whiting Award, this slim volume is full of grace and beauty . . . No matter where he goes, his language is hauntingly astute, and the reality he conjures is multi-layered.” —Elizabeth Lund, The Washington Post

“Phillips demonstrates extraordinary range and remarkable acuity . . . Consistently smart and clearly talented, Phillips is one to read now and to watch for in the future.” —Diego Baez, Booklist

“It most often seems to me that English is not a particularly beautiful language, but Rowan Ricardo Phillips's poetry argues eloquently against that. His ear for the language, sound and syntax, is inherited through Wallace Stevens and Hart Crane, clowningly playful while serious, repetitive while new, grounded in the city as well as a sheep meadow though highly philosophical and airy as a snow angel . . .when Phillips strides into his own rhythms and visions, as in "The Once and Future King of Ohio" (note the last, sublime perspective of this poem taking place in a rear view mirror), I think he is one of the best young poets I've read in years.” —John Poch, 32 Poems Magazine

“A truly extraordinary book, the best first book by an American poet I've read in years.” —Lawrence Joseph, Commonweal on The Ground