Dilla Time: The Life and Afterlife of J Dilla, the Hip-Hop Producer Who Reinvented Rhythm (Hardcover) 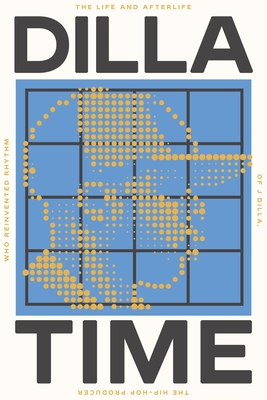 If you're already a Dillahead, this book will surely expand your appreciation for his particular brand of musical genius, providing insight both into Jay Dee's personal life and production techniques as well as the social and historical context from which he arose - including fascinating history of the city of Detroit, of swung versus straight time, and of the evolution of machine-made music both in and out of hip-hop. If you're not already a Dillahead, well, you will be soon...

"This book is a must for everyone interested in illuminating the idea of unexplainable genius.” —QUESTLOVE

Equal parts biography, musicology, and cultural history, Dilla Time chronicles the life and legacy of J Dilla, a musical genius who transformed the sound of popular music for the twenty-first century.

He wasn’t known to mainstream audiences, even though he worked with renowned acts like D’Angelo and Erykah Badu and influenced the music of superstars like Michael Jackson and Janet Jackson. He died at the age of thirty-two, and in his lifetime he never had a pop hit. Yet since his death, J Dilla has become a demigod: revered by jazz musicians and rap icons from Robert Glasper to Kendrick Lamar; memorialized in symphonies and taught at universities. And at the core of this adulation is innovation: a new kind of musical time-feel that he created on a drum machine, but one that changed the way “traditional” musicians play.

In Dilla Time, Dan Charnas chronicles the life of James DeWitt Yancey, from his gifted childhood in Detroit, to his rise as a Grammy-nominated hip-hop producer, to the rare blood disease that caused his premature death; and follows the people who kept him and his ideas alive. He also rewinds the histories of American rhythms: from the birth of soul in Dilla’s own “Motown,” to funk, techno, and disco. Here, music is a story of Black culture in America and of what happens when human and machine times are synthesized into something new. Dilla Time is a different kind of book about music, a visual experience with graphics that build those concepts step by step for fans and novices alike, teaching us to “see” and feel rhythm in a unique and enjoyable way.

Dilla’s beats, startling some people with their seeming “sloppiness,” were actually the work of a perfectionist almost spiritually devoted to his music. This is the story of the man and his machines, his family, friends, partners, and celebrity collaborators. Culled from more than 150 interviews about one of the most important and influential musical figures of the past hundred years, Dilla Time is a book as delightfully detail-oriented and unique as J Dilla’s music itself.

Dan Charnas is the author of the definitive history of the hip-hop business, The Big Payback (NAL/Penguin). He’s also the author of Work Clean (Rodale/Harmony), a book detailing applying chefs’ techniques to almost any life situation. He was also the co-creator and executive producer of the VH1 movie and TV series, The Breaks. He lives in Manhattan, and is an associate professor at NYU/Tisch’s Clive Davis Institute of Recorded Music.

"Stunning portrait of the short life and fast times of James Dewitt Yancey. . . sad, funny and unfailingly humane, it’s not only one of the best books this writer has ever read about hip-hop but also sets a new gold standard for writing about music full stop."— Ben Johnson, Mojo Magazine

"[Dilla Time] do[es] what good music books should: send you back to the source material . . . Dilla Time is an important piece of music writing, affording its African-American subject the respect that the rock establishment has long accorded its white heroes." —The Economist

“It’s no ordinary book. . . equal parts biography, musical analysis and cultural history delving deep not only into Dilla’s history and music but also into the histories of rhythm and his hometown of Detroit.”—Variety

“Educational without being overbearing, emotional without turning saccharine, Dilla Time is a must-read not only for fans of Yancey, but anyone with a deep love for hip-hop or Black music, full stop.”—The Ringer

“Dilla Time is a portrait of a complex genius taken too young, as well as a glorious study of the music and culture he created.”—Spin

“An ambitious, dynamic biography of J Dilla, who may be the most influential hip-hop artist known by the least number of people. . . A wide-ranging biography that fully captures the subject’s ingenuity, originality, and musical genius.” —Kirkus (starred review)

“The book’s heart is its rich, evocative musicological analysis, complete with rhythm diagrams, of Dilla’s beats. . . Charnas’s engrossing work is one of the few hip-hop sagas to take the music as seriously as its maker.” —Publishers Weekly (starred review)

“Whenever I’ve been asked why Dilla was special, I didn’t feel like I had the right vocabulary to explain his importance—specifically the way he made work that was so perfectly imperfect that it redefined the way I thought about art. Dan Charnas to the rescue. He scaled the mountain of Dilla’s complex career and sent back instructions so that others could make the climb. This book is a must for everyone interested in illuminating the idea of unexplainable genius.” —QUESTLOVE

“J Dilla turned what one generation deemed musical error into what the next knew to be musical innovation. In this splendid book, Dan Charnas offers an uncanny mix of research and vision, documentation and interpretation, plenitude and momentum. Dilla Time is definitive. And exhilarating.” —MARGO JEFFERSON, author of Negroland

“The greatest hip-hop producer of all time is getting the love and care his legacy deserves. Dilla Time is a master class.” —DREAM HAMPTON

“With deep love and beautiful detail, this book gives credit where credit is most deserved.” —DANYEL SMITH, author of Shine Bright

“With this assiduously researched, stirringly told, and expansively elucidated accounting of J Dilla’s life as muse, mythos, and generationally transformative composer of hip-hop beats, Dan Charnas has provided readers with an alchemist’s cookbook of its titular, wizardly subject.” —GREG TATE, author of Flyboy in the Buttermilk

“In the way that J Dilla’s music was a portal for us to hear our world and feel the pulse of life anew, Charnas has made a portal through which to understand our time—historical time, musical time, and James Yancey’s own time—in a new way. Dilla Time is a book that will be read and reread with as much pleasure as we have listened and relistened to Dilla’s music. A masterpiece.” —JEFF CHANG, author of Can’t Stop Won’t Stop

“I look at J Dilla as a man who redefined the word ‘innovative.’ This book makes you feel like you traveled his journey every single step.” —DJ PREMIER

"How can wrong be right? How can one be both universally revered and massively under-appreciated? Filled with impeccable reportage, elegant prose, and incandescent anecdotes, Dilla Time is more than an urgently needed biography of hip hop’s most revolutionary producer. It is a testament to the never-ending struggle between creativity and mortality." —ROB KENNER, author of The Marathon Don’t Stop: The Life and Times of Nipsey Hussle