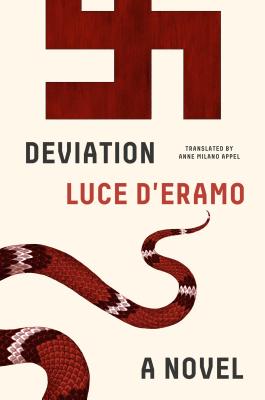 By Luce D'Eramo, Anne Milano Appel (Translated by)
Unavailable, our apologies.
Out of Print

First published in Italy in 1979, Luce D’Eramo’s Deviation is a seminal work in Holocaust literature. It is a book that not only confronts evil head-on but expands that confrontation into a complex and intricately structured work of fiction, which has claims to standing among the greatest Italian novels of the twentieth century.

Lucia is a young Italian girl from a bourgeois fascist family. In the early 1940s, when she first hears about the atrocities being perpetrated in the Nazi concentration camps, she is doubtful and confused, unable to reconcile such stories with the ideology in which she’s been raised. Wanting to disprove these “slanders” on Hitler’s Reich, she decides to see for herself, running away from home and heading for Germany, where she intends to volunteer as camp labor. The journey is a harrowing, surreal descent into hell, which finds Lucia confronting the stark and brutal realities of life under Nazi rule, a life in which continual violence and fear are simply the norm. Soon it becomes clear that she must get away, but how can she possibly go back to her old life knowing what she now knows? Besides, getting out may not be as simple as getting in.

Finally available in English translation, Deviation is at once a personal testament, a work of the imagination, an investigation into the limits of memory, a warning to future generations, and a visceral scream at the horrors of the world.

Luce D’Eramo (1925–2001) was born in Reims, France, to Italian parents. She is the author of numerous works of fiction and nonfiction, including the novels Nucleo Zero and Partiranno. Deviation, a fictionalized account of her experiences during the Second World War, was an international bestseller.

"If we appreciate Karl Ove Knausgaard for his introspective tenacity, then we must genuflect before Luce D'Eramo . . . It is not simply D'Eramo's personal story, but also her ruthless quest for self-knowledge, that render Deviation a literary tour de force." —Martha Anne Toll, NPR

"Luce D’Eramo’s extraordinary novel Deviation, a bestseller in Italy when published in 1979 but only now available in En­glish . . . is, as its title may imply, a rejection of the idea that literary form can be neatly separated from psychic and political life." —Lidija Haas, Harper's Magazine