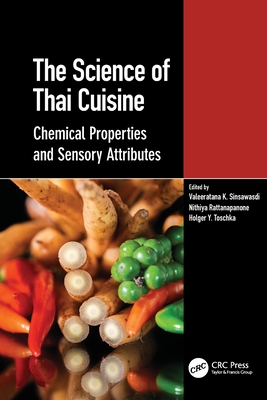 Lists of the most popular or delicious dishes in the world always include Thai food. Sriracha sauce has gone from a dipping sauce made in a small town in Thailand to become a recognizable flavor in cuisine worldwide. With a reputation of being hot and spicy, it is not uncommon to see those who try Thai food for the first time shedding tears and sporting a red nose. Yet, the Thai national cuisine has gained a high degree of global recognition and admiration despite Thailand being a relatively small country. Is this down to sheer luck, its being an extensive work of art, or, possibly, because of scientific literacy?

The Science of Thai Cuisine: Chemical Properties and Sensory Attributes approaches the art of cooking and serving from the perspective of science and proposes the possible rationales behind Thai culinary art. With applied chemistry and sensory science, it bridges the gap between food science and culinary arts, explaining the functional properties and changes in major ingredients and techniques used in Thai cuisine.

While there are numerous cookbooks that feature Thai cuisine, none are as dedicated as this to explaining the science behind the ingredients, cooking methods, and sensory aspects. This book will be beneficial to professionals in the food industry, appealing to chefs, food scientists, sensory analysis experts, as well as anyone who has an interest in Thai culture.

Valeeratana Kalani Sinsawasdi grew up in Thailand. Her interest in food started at a very young age as she liked to observe her "khun-ya" making the meal plan every day. The cooking was labor-intensive, yet it was fascinating. She was impressed by how herbs and spices would become invisible in the finished dish but easily detectable through taste and smell. It seems as if the preparation of curry paste was making of a magic potion.With her other interest in science, Valeeratana has committed herself to the field of Food Science. First, she received her bachelor's degree in Food Science from Chiang Mai University, Thailand. Then, a master's degree from the University of Hawaii and a PhD degree from the University of Florida, USA, all in Food Science. Valeeratana has extensive experience in the food industry. In the USA with Dean Foods, in Asia and Thailand with Unilever, and as a consultant to various companies. In the academic sphere, she has taught several Food Science courses at Mahidol University, Thailand.Nithiya Rattanapanone studied in Thailand and received her BSc and MSc from Chiang Mai University and Mahidol University. She then earned her PhD in Food Science from the University of Nottingham, England, in 1977 for her pioneer research on mRNA changes during the ripening of tomatoes. She extended her interest to many topics of Food Science and published more than 70 peer-reviewed articles during her time teaching at the Department of Food Science, Chiang Mai University. She also authored many books and textbooks in Food Chemistry, Post-Harvest Technology, and Human Nutrition, notably for college-level courses in Thailand. In addition, Nithiya has served as visiting scientist at many international institutes, for example: the USDA Agricultural Research Service, Beltsville, Maryland, the Citrus and Other Products Research, Florida, the FDA National Center for Toxicological Research, Arkansas, in the USA; CIRADFLHOR, Montpellier, in France; and at the Faculty of Food Science and Technology, University of Reading in the UK. In 2002, she became the first lecturer in Thailand who received the academic rank of Professor in Food Science and Technology. Then, she was honored as Professor Emeritus for Chiang Mai University after she retired in 2011. To date, she actively contributes to academics and the Thai government agency.Holger Y. Toschka studied Biochemistry and Molecular Biology at the Institute for Biochemistry at Free University in Berlin, focusing on Gene structure and expressing of ribosomal genes. He received his PhD in that research field in 1988 and joined Unilever after a short Post Doc stint in early 1990 as scientist manager for Gene Technology and Fermentation in the Netherlands. Since then, he has worked at various locations in various roles in R&D and Supply chain for the Food and Refreshment Divison of the company. Since the beginning of 2018, he has been the Foods R&D director for South East Asia and is based in Bangkok. It's the second time he has lived in Thailand, which gave him 7 years to learn about Thai food and cooking. Holger worked until 2022 as R&D director in Bangkok. Holger is German, married to Ute, and with four fully grown children.