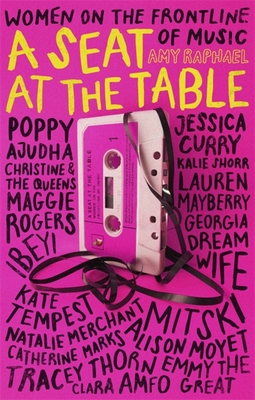 INTERVIEWS WITH WOMEN ON THE FRONTLINE OF MUSIC

Writer and critic Amy Raphael has interviewed some of the world's most iconic musicians, including Courtney Love, Patti Smith, Björk, Kurt Cobain and Elton John. In 1995 she wrote the critically-acclaimed Never Mind the Bollocks: Women Rewrite Rock, which included a foreword by Debbie Harry.

More than two decades on, the music business has changed, but the way women are regarded has not. In this new book, A Seat at the Table, Raphael interviews eighteen women who work in the music industry about learning to speak out, #MeToo, social media, queer politics and the subtleness of everyday misogyny.

Amy Raphael is a British writer and critic who has worked for The Face, Esquire, Elle, NME, Rolling Stone and all the British broadsheets. Her books include Danny Boyle in Conversation with Amy Raphael and Mike Leigh on Mike Leigh. She co-wrote Easily Distracted, Steve Coogan's autobiography, and worked with David Hare on his memoir, The Blue Touch Paper. She lives in Brighton with her daughter.

A series of wide-ranging, deep-dive, soul-baring interviews, full of candid, intimate, spiky meditations on inspiration, artistry, sexuality, race, love, self-doubt, abuse, defiance, and everything in between . . . Raphael had carved a vital space for female artists to 'womanspread', as it were, and speak freely—Barbara Ellen, Observer

Variously optimistic, troubling, joyful, illuminating, fierce and thoughtful. It is often all these things at once—Fiona Sturges, Guardian

In 1995, the journalist published Never Mind The Bollocks: Women Rewrite Rock, a series of interviews with artists including Courtney Love, Bjork, and Justine Frischmann. This kind-of-sequel updates what's changed - and what hasn't - for female musicians, with Christine And The Queens, Mitski and Kate Tempest among those participating. The most urgent interview is with Chvrches' Lauren Mayberry, who offers a powerful account of the negative drag caused by online trolls and the effects of speaking out. Reasons to be cheerful - and angry—Q Magazine

Many women interviewed for this collection - including the eloquent Kate Tempest, gender activist Chris (AKA Heloise Letissier from Christine and the Queens), a feisty Alison Moyet and wise woman Natalie Merchant - argue that it's not just about whether you 'get your tits out', but whether you get respect and recognition for your work. 'I've been in this industry for 35 years . . . I've never felt the need to conform to one shape. No one has ever really claimed me,' says Moyet. 'I've never been cosseted, nor have I been someone's muse. And [that] really saved me.' Moving words indeed—Lucy O'Brien, Mojo

Raphael has collated a stunning collection of interviews, then removed herself entirely, presenting each as a narrative as if the subject is talking straight to you, the reader. It breaks an added barrier in really being invited in to understand each interviewee, unfiltered. It's a fascinating, brilliant book, full of joy, rage, a love of music, and a battle to show that it can be done even when culture might push back. A celebration of some of the best and most exciting faces in music today, and a must read—The Skinny