A Breach of Promise: A William Monk Novel (Paperback) 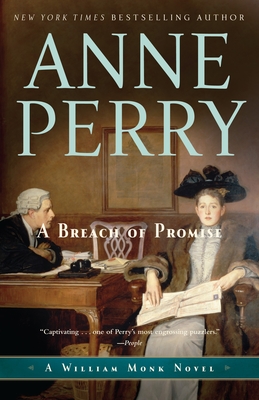 This is book number 9 in the William Monk series.

In a sensational breach-of-promise suit, two wealthy social climbers are suing on behalf of their beautiful daughter, Zillah. The defendant is Zillah’s alleged fiancé, brilliant young architect Killian Melville, who adamantly declares that he will not, cannot, marry her. Utterly baffled by his client’s refusal, Melville’s counsel, Sir Oliver Rathbone, turns to his old comrades in crime—William Monk and nurse Hester Latterly. But even as they scout London for clues, the case suddenly and tragically ends, in an outcome that no one—except a ruthless murderer—could have foreseen.

“Captivating . . . one of Perry’s most engrossing puzzlers.”—People

“Anne Perry, hailed as the queen of the Victorian mystery, shows why with A Breach of Promise.”—San Diego Union-Tribune

“No one weaves plot and subplots as seamlessly as Perry. . . . Fans will be delighted by the long-awaited romantic denouement, which brought tears to my eyes.”—Los Angeles Times

“The story is full of feeling and weighted with intelligent thought about the status of women in mid-Victorian society.”—The New York Times Book Review

“Scenes of Victorian England so rich in detail that they seem more a product of Perry’s memory than her prodigious research.”—The Denver Post