Death of a Stranger: A William Monk Novel (Paperback) 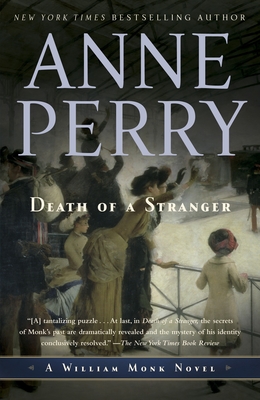 This is book number 13 in the William Monk series.

DEATH OF A STRANGER

For the prostitutes of Leather Lane, nurse Hester Monk’s clinic is a lifeline, providing medicine, food, and a modicum of peace—especially welcome since lately their ailments have escalated from bruises and fevers to broken bones and knife wounds. At the moment, however, the mysterious death of railway magnate Nolan Baltimore in a sleazy neighborhood brothel overshadows all else. Whether he fell or was pushed, the shocking question in everyone’s mind is: What was such a pillar of respectability doing in a seedy place of sin?

Meanwhile, brilliant private investigator William Monk acquires a new client, a mysterious beauty who asks him to ascertain beyond a shadow of a doubt whether or not her fiancé, an executive in Nolan Baltimore’s thriving railway firm, has become enmeshed in fraudulent practices that could ruin him.

As Hester ventures into violent streets to learn who is responsible for the brutal abuse of her patients, Monk embarks upon a journey into the English countryside, where the last rails are being laid for a new line. But the sight of tracks stretching into the distance revives memories once stripped from his consciousness by amnesia—as a past almost impossible to bear returns, eerily paralleling a fresh tragedy that has already begun its inexorable unfolding.

“Few mystery writers this side of Arthur Conan Doyle can evoke Victorian London with such relish for detail and mood.”
–San Francisco Chronicle