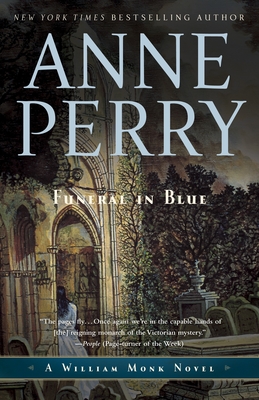 This is book number 12 in the William Monk series.

Two beautiful women have been found strangled in the studio of a well-known London artist. To investigator William Monk and his wife, Hester, the murders are a nightmare. One of the victims is the wife of Hester’s cherished colleague, surgeon Dr. Kristian Beck, a Viennese émigré who becomes the prime suspect. With an intensity born of desperation, the Monks seek evidence that will save Dr. Beck from the hangman. From London’s sinister slums to the crowded coffeehouses of Vienna, where embers of the revolution still burn in the hearts of freedom-loving men and women, Hester and Monk seek to penetrate not only the mystery of Elissa Beck’s death but the riddle of her life.

“The pages fly . . . Once again we’re in the capable hands of [the] reigning monarch of the Victorian mystery.”—People (Page-turner of the Week)

“Funeral in Blue captures and retains the reader’s undivided attention. . . . The plot is intriguing on its own, but it becomes fascinating as Perry, with each new avenue of the investigation, seamlessly explores the nature of truth and the price at which it comes.”—The Virginian Pilot

“Perry’s historical mysteries suggestively peel away layer after layer of Victorian respectability until the underlying social evils of a gilded era are exposed in all their naked truth.”—The New York Times Book Review

“An old-style private eye novel—and an extremely good one . . . No one writes more elegantly than Perry, nor better conjures up the rich and colorful tapestry of London in the Victorian era.”—The Plain Dealer