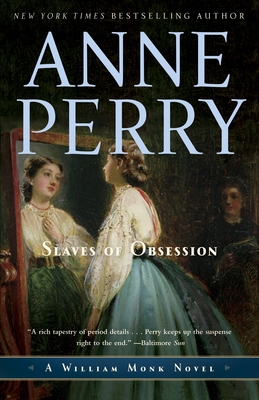 This is book number 11 in the William Monk series.

The year is 1861. The American Civil War has just begun, and London arms dealer Daniel Alberton is becoming a very wealthy man. His quiet dinner party seems remote indeed from the passions rending America. Yet investigator William Monk and his bride, Hester, sense growing tensions and barely concealed violence. For two of the guests are Americans, each vying to buy Alberton’s armaments. Soon Monk and Hester’s forebodings are fulfilled as one member of the party is brutally murdered and two others disappear— along with Alberton’s entire inventory of weapons. As Monk and Hester track the man they believe to be the murderer all the way to Washington, D.C., and the bloody battlefield at Manassas, Slaves of Obsession twists and turns like a powder-keg fuse and holds the reader breathless and spellbound.

“A rich tapestry of period details . . . Perry keeps up the suspense right to the end.”—Baltimore Sun

“When it comes to the Victorian murder mystery, no one can top [Anne] Perry. . . . This is one of her best.”—San Francisco Examiner

“Scenes are brilliantly etched . . . [Perry is] the most adroit sleight-of-hand practitioner since Agatha Christie.”—Chicago Sun-Times

“Meticulously constructed . . . Perry’s images of the carnage and confusion of battle are relentless in their intensity, unflinching in their truth-telling detail.”—The New York Times Book Review

“A welcome and entertaining read . . . Perry writes with a deft sense of history and place.”—The Cincinnati Post