Weighed in the Balance: A William Monk Novel (Paperback) 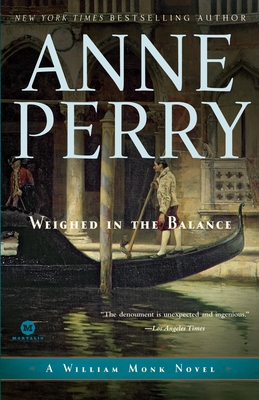 This is book number 7 in the William Monk series.

When Countess Zorah Rostova asks London barrister Sir Oliver Rathbone to defend her against a charge of slander, he is astonished to find himself accepting. For without a shred of evidence, the countess has publicly insisted that the onetime ruler of her small German principality was murdered by his wife, the woman who was responsible for the prince’s exile to Venice twenty years before. Private investigator William Monk and his friend Hester Latterly journey to the City of Water in an attempt verify the countess’s claims, and though the two manage to establish that the prince was indeed murdered, as events unfold the likeliest suspect seems to be Countess Zorah herself.

“The denouement is unexpected and ingenious.”—Los Angeles Times

“[Takes] the reader clue-hunting through the glittery courts of Venice, London, and a never-never-land principality. It’s all rich as a warm scone slathered with jam and clotted cream.”—St. Petersburg Times