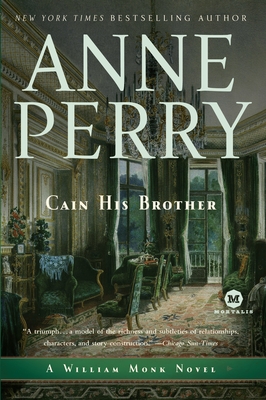 This is book number 6 in the William Monk series.

In his family life Angus Stonefield had been gentle and loving, in business a man of probity, and in his relationship with his twin brother, Caleb, a virtual saint. Now Angus is missing, and it appears more than possible that Caleb—a creature long since abandoned to depravity—has murdered him. Hired to solve the mystery, William Monk puts himself in Angus’s shoes, searching for clues to the missing man’s fate and his vicious brother’s whereabouts. Slowly Monk inches toward the truth—and also, unwittingly, toward the destruction of his good name and livelihood.


“A triumph . . . a model of the richness and subtleties of relationships, characters, and story construction.”—Chicago Sun-Times

“Masterful . . . darkly chilling . . . [Anne] Perry eloquently delivers to her readers the flavor of Victorian England. . . . Readers will be kept entertained—and guessing—right up to the final pages.”—Milwaukee Journal Sentinel

“Just when you think you have it figured out, think again! No one can capture and bring to life the drama, excitement, and feel of Victorian England like Perry.”—Mostly Murder

“Few mystery writers this side of Arthur Conan Doyle can evoke Victorian London with such relish for detail and mood.”—San Francisco Chronicle

“Perry spins a clever tale, filled with as many twists and turns as the labyrinthine world and city of which she writes.”—Mobile Register