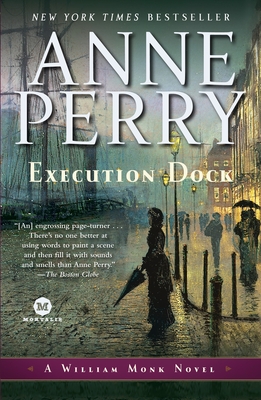 This is book number 16 in the William Monk series.

On the bustling docks along the River Thames, Great Britain’s merchant ships unload the treasures of the world. And here, in dank and sinister alleys, sex merchants ply their lucrative trade. The dreaded kingpin of this dark realm is Jericho Phillips, who seems far beyond the reach of the law. But when thirteen-year-old Fig is found with his throat cut, Commander William Monk of the River Police swears that Phillips will hang for this abomination. Monk’s wife, Hester, draws a highly unusual guerrilla force to her husband’s cause—a canny ratcatcher, a retired brothel keeper, a fearless street urchin, and a rebellious society lady. To one as criminally minded as Phillips, these folks are mere mosquitoes, to be sure. But as he will soon discover, some mosquitoes can have a deadly sting.

"Set in 1864, bestseller Perry's outstanding 16th novel to feature William Monk (after Dark Assassin) finds Monk suffering from a series of hard knocks, including memory loss. Now superintendent of the Thames River Police Force, Monk is on the verge of closing the books on Jericho Phillips, a particularly nasty villain who specializes in child pornography. Monk and his team catch Phillips, but what appears to be an airtight murder case springs leaks and ends with the accused's acquittal. Many in authority view the judgment as a rebuke to the river police, whose existence as a separate force is threatened. Convinced that he got the right man, despite the jury's verdict, Monk devotes himself to setting the record straight. Monk's wife, Hester, who works with London's downtrodden, provides support. Rich in plot development, believable characters and period detail, this entry will only add to the already sizable ranks of Perry's admirers."—Publishers Weekly


Praise for Anne Perry and her William Monk novels

The Shifting Tide
“An engrossing story that leaves the reader waiting for Monk’s next adventure . . . The mysterious and dangerous waterfront world of London’s ‘longest street,’ the Thames, comes to life.”—South Florida Sun-Sentinel


Funeral in Blue
“No one writes more elegantly than Perry, nor better conjures up the rich and colorful tapestry of London in the Victorian era. But for all its arcane setting and stylistic eloquence, Funeral in Blue is an old-style private eye novel—and an extremely good one.”—Cleveland Plain Dealer