Proud: My Fight for an Unlikely American Dream (Hardcover) 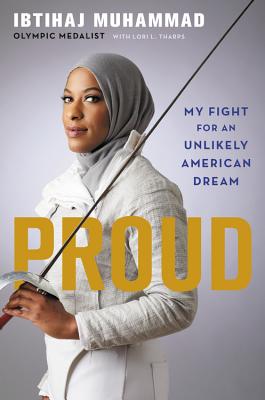 Growing up in New Jersey as the only African American Muslim at school, Ibtihaj Muhammad always had to find her own way. When she discovered fencing, a sport traditionally reserved for the wealthy, she had to defy expectations and make a place for herself in a sport she grew to love.

From winning state championships to three-time All-America selections at Duke University, Ibtihaj was poised for success, but the fencing community wasn't ready to welcome her with open arms just yet. As the only woman of color and the only religious minority on Team USA's saber fencing squad, Ibtihaj had to chart her own path to success and Olympic glory.

Proud is a moving coming-of-age story from one of the nation's most influential athletes and illustrates how she rose above it all.

Ibtihaj Muhammad is a fencer and the first Muslim American woman in hijab to compete for the United States in the Olympic Games. She is also the first female Muslim American to medal at the Olympic Games, winning bronze in the women's saber team event. An activist, speaker, and entrepreneur, Ibtihaj has written a memoir, Proud, and inspired the first hijabi Barbie in her likeness. She invites you to visit her online at ibtihajmuhammad.com.

S. K. Ali is the award-winning author of Saints and Misfits and Love from A to Z and the coeditor of an upcoming Eid anthology. Like Faizah and Asiya, she and her sister visited hijab shops every year before the first day of school to choose their proudest colors.

Hatem Aly is an Egyptian-born illustrator whose work has been featured on television and in multiple publications worldwide. Among other books, he illustrated Newbery Honor winning novel The Inquisitor's Tale by Adam Gidwitz. He currently lives in New Brunswick, Canada, with his wife, son, and more pets than people.

"What a clear-eyed and amazing memoir.... I plowed through it.... Ibtihaj's story is at once so deeply personal and amazingly universal."—Jacqueline Woodson, National Book Award winner and New York Times bestselling author of Brown Girl Dreaming and Another Brooklyn

"Her story is inspiring and illuminating."—The Christian Science Monitor

"A tumultuous, unforgettable tale of perseverance and faith."—The Chicago Tribune

"[Ibtihaj's] stories of fighting racism and xenophobia are inspiring... but Muhammad's battles with her own demons are equally brave and 100 percent relatable."—Glamour.com

"Ibtihaj Muhammad is as sharp with her words as she is with a sabre."—The National (United Arab Emirates)

"Fencing made her who she is today, but fencing isn't her only narrative. Her journey is one of authenticity at all costs and being unapologetically herself."
—ESPNw

"A powerful sentiment that sums up not only her own struggles, but those of so many minorities in America."

"It's clear that Muhammad has become an icon beyond the realm of sports.... Ibtihaj Muhammad's journey is uniquely her own, and yet, it is one that many people will find relatable, comforting, and inspiring."
—Bustle