Kids These Days: Human Capital and the Making of Millennials (Hardcover) 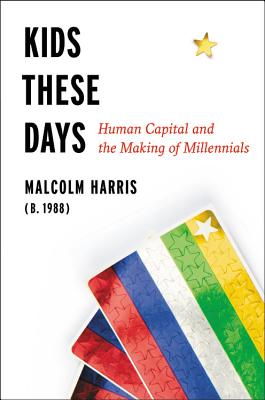 By Malcolm Harris
$25.00
This book is out of stock indefinitely, unable to order at this time.

You know that scene in Good Will Hunting where Robin Williams hugs weeping Matt Damon and repeats It's not your fault? Reading this clarifying structural analysis of the millennial generation made me (an old millennial) feel sort of like that.

Millennials have been stereotyped as lazy, entitled, narcissistic, and immature. We've gotten so used to sloppy generational analysis filled with dumb clichés about young people that we've lost sight of what really unites Millennials. Namely:

We are the most educated and hardworking generation in American history. We poured historic and insane amounts of time and money into preparing ourselves for the 21st-century labor market. We have been taught to consider working for free (homework, internships) a privilege for our own benefit. We are poorer, more medicated, and more precariously employed than our parents, grandparents, even our great grandparents, with less of a social safety net to boot.

Kids These Days is about why. In brilliant, crackling prose, early Wall Street occupier Malcolm Harris gets mercilessly real about our maligned birth cohort. Examining trends like runaway student debt, the rise of the intern, mass incarceration, social media, and more, Harris gives us a portrait of what it means to be young in America today that will wake you up and piss you off.

Millennials were the first generation raised explicitly as investments, Harris argues, and in Kids These Days he dares us to confront and take charge of the consequences now that we are grown up.

Malcolm Harris is a freelance writer and an editor at the New Inquiry. His work has appeared in the New Republic, Bookforum, the Village Voice, n+1, and the New York Times Magazine. He lives in Philadelphia.

"A
landmark...Harris is a peerless observer of the harrowing economic costs of 'meritocracy'."—n+1

"Malcolm
Harris offers up an exciting, persuasive argument that young people are not, in
fact, monsters. An
excellent gift for NPR-listening elders who appreciate a good debate and could
use a little sympathy for the millennial."—New York Magazine

"The first major accounting of the
millennial generation written by someone who belongs to it."—Jia Tolentino, The New Yorker

"When will someone stick
up for millennials? We have been sheltered by our parents, swindled by our
universities, deadened by our therapists, and for all this our reward has been
glib condescension from the boomer press. Rising to our defense is Harris, a
familiar provocateur from the internet's left flank. Harris contends that
America has stiffed our generation...He brings a fresh, contrarian eye to some of the usual data
points...As generational advocates go, we could do worse than Harris."—New York Times Book Review

"Malcolm Harris's thesis is the kind of brilliantly simple idea that instantly clarifies an entire area of culture: Millennials are the way they are-anxious, harried, and 'narcissistically' self-focused, though hardly lazy or entitled-because the neoliberal economy has made them so. When we raise children in a world that reduces people to 'human capital', then bids down the price of that resource, what else should we expect? Kids These Days is deft, witty, unillusioned, and brutally frank. Read it and weep, puke, scream."—WilliamDeresiewicz, New York Times bestselling author of Excellent Sheep

"Kids These Days is the best, most comprehensive work of social and economic analysis about our benighted generation. Malcolm Harris matches Naomi Klein for depth of research and Jane Jacobs for systemic vision. If you're a millennial who feels economically jinxed and unfairly spat-upon, but can't say why, cram this book in your brain; if you think millennials are lazy and entitled, cram this book in your mouth. Fascinating, infuriating, and bulging with receipts, Kids These Days shows us why no space is safe."—Tony Tulathimutte,author of Private Citizens

"This fiercely smart book is not just another 'millennials
killed chain restaurants' kind of thing. Instead, Harris dives deep into the
ways that the millennial generation has been shaped by the capitalist economic
forces at work now in America. . . It's a must read for anyone who cares about
the future of our society."—Nylon

"It is difficult to believe nobody has written this
book before, although it is fortunate that Harris--who manages to be quick and
often funny without sacrificing rigor--is the author who ultimately took up the
task. In fewer than three hundred pages, he surveys the myriad hot takes on
millennials-they're lazy, they're entitled, they're narcissists who buy avocado
toast instead of homes, slacking on Snapchat at their unpaid internships-and
asks, 'Why?'"—Bookforum

"Malcolm Harris
restores a good deal of precision to the business of defining the millennial
and generational discourse in general. Adhering to a Marxian and behaviorist
account of society, Harris argues that you cannot understand millennials -
those born between 1980 and 2000, which include him, and me for that matter -
without examining the political, economic and social institutions that nurtured
them... Through this lens we get a sweeping
sketch of the bleak, anxiety-ridden lives of young Americans."—Financial Times

"A methodical deconstruction of one of the stupidest tropes to degrade recent discourse. The 'millennial' is created, not born, as Harris shows, and as is true of all creations, her qualities reveal more about her makers than they do about her... Kids These Days answers a political moment defined both by youthful outrage and by the patronizing responses to it, which deny that it is informed by lived experience."—The Nation

"Harris writes
clearly and thoughtfully on key issues facing this generation today. . . [he] reveals the political, cultural, and economic
climates that millennials need to navigate, along with the new issues, never
seen in previous generations, millennials must address. Readers interested in
sociology of class, economic history, and the millennial generation will find
plenty of fascinating food for thought here."—Booklist

"An
informative study of why the millennial generation faces more struggles than
expected, despite the hard work they've invested in moving ahead."—Kirkus

"Harris offers a potent
rebuke to the idea that neoliberalism is an ideology of freedom and movement,
showing instead how lives have become increasingly surveilled, managed and even
endangered as corporations attempt to push drive for profit to the absolute
limits."—The Forward

"A crucial work of generational analysis...In prose that is
precise, readable, and witty, [Harris] explores the economic, social, and
political conditions that shaped those of us born between 1980 and 2000.
Harris's central contention is that millennials are what happens when
contemporary capitalism converts young people into 'human capital'. After
reading his book, it seems ill-advised to understand millennials any other way."—Dissent Magazine