The Targeter: My Life in the CIA, Hunting Terrorists and Challenging the White House (Hardcover) 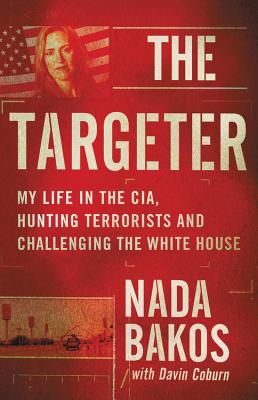 By Nada Bakos, Davin Coburn (With)
$29.00
This book is out of stock indefinitely, unable to order at this time.

A CIA analyst's "revealing and utterly engrossing account" of the world of high-stakes foreign intelligence and her role within the campaign to stop top-tier targets inside Al-Qaida (Joby Warrick).
In 1999, 30-year-old Nada Bakos moved from her lifelong home in Montana to Washington, D.C., to join the CIA. Quickly realizing her affinity for intelligence work, Nada was determined to rise through the ranks of the agency first as an analyst and then as a Targeting Officer, eventually finding herself on the frontline of America's war against Islamic extremists.
In this role, Nada was charged with determining if Iraq had a relationship with 9/11 and Al-Qaida, and finding the mastermind behind this terrorist activity: Abu Musab al-Zarqawi. Her team's analysis stood the test of time, but it was not satisfactory for some members of the Administration.
In a tight, tension-packed narrative that takes the reader from Langley deep into Iraq, Bakos reveals the inner workings of the Agency and the largely hidden world of intelligence gathering post 9/11. Entrenched in the world of the CIA, Bakos, along with her colleagues, focused on leading U.S. Special Operations Forces to the doorstep of one of the world's most wanted terrorists.
Filled with on-the-ground insights and poignant personal anecdotes, The Targeter shows us the great personal sacrifice that comes with intelligence work. This is Nada's story, but it is also an intimate chronicle of how a group of determined, ambitious men and women worked tirelessly in the heart of the CIA to ensure our nation's safety at home and abroad.

Nada Bakos is a former Central Intelligence Agency (CIA) analyst on the team charged with analyzing the relationship between Iraq, al Qaida, and 9/11, and was the Chief Targeting officer following Abu Musab al-Zarqawi. Bakos writes, speaks and appears on broadcast media to discuss national security and foreign policy.

As heard on NPR's Morning Edition

"Part Zero Dark Thirty, part memoir, The Targeter provides a rare inside look at the CIA's analysis shop at a particularly difficult time: the run-up to the American invasion of Iraq and the early years of the war... will appeal to those who want to learn about the events that presaged the rise of the Islamic State and are curious about the CIA's inner workings."—The Washington Post

"Nada Bakos had a frontline assignment during some of the most important chapters of America's post-9/11 wars. Her well written account of her work at the CIA is fascinating and underlines the many sacrifices she and her colleagues made in the fight against al-Qaeda. Bakos has also written one of the most clear-eyed and interesting accounts of what it is really like working at the CIA."—Peter Bergen, author of Manhunt: The Ten-Year Search for Bin Laden from 9/11 to Abbottabad.

"Nada Bakos takes you deep inside the tense, stressful, and driven world of the CIA's analysts as few others have. Life and death issues are on the line more than most know - but Ms. Bakos is one who does and she shows you that in the Targeter with candor, drama, integrity, and grit."—John McLaughlin, former Acting Director and Deputy Director of CIA

"Bakos writes with authority and searing honesty about the demands of her work as a targeter and the dangers and dysfunction of post-invasion Iraq. The result is a gripping behind-the-scenes account of the hunt for one of the world's most brutal terrorists. The combination of a sharp, analytical mind and a genuine humility and humanity underscores why women make some of the best CIA analysts."—Clarissa Ward, Chief International Correspondent for CNN

"A revealing and utterly engrossing account of the campaign to stop the terrorist mastermind behind the rise of ISIS. Former intelligence officer Nada Bakos takes the reader deep inside the CIA's secret war in Iraq with a fast-paced narrative that is at turns thrilling, funny, maddening and remarkably candid."
—Joby Warrick, author of Black Flags: The Rise of ISIS, winner of the Pulitzer Prize

"The Targeter reads like a suspense novel written in Hollywood. But it's the true story of an unsung hero working to keep America safe and speaking hard truths to those in power. I relied on public servants like Nada to fight the Islamic State. Our country is indebted to their rigor, tradecraft, and dedicated war zone service, which carries a personal toll. This is the first inside account of what it's really like."—Brett McGurk, Former Special Presidential Envoy for Campaign to Defeat ISIS

"The Targeter is a raw, honest, and gripping account of the thrilling but daunting task of a CIA analyst answering her inner call to keep America and her people safe. Nada Bakos is the real deal...Nada shares the lessons she learned when serving the United States and does not shy away from acknowledging that, in counterterrorism, tactical wins do not always translate into strategic successes. This book is an important asset for any analyst, policy maker, or thought leader looking to make a difference in counterterrorism in the 21st century."—Ali Soufan, Chief Executive Officer of The Soufan Group and former FBI Supervisory Special Agent

"For the last decade, Nada Bakos has been a go-to source for understanding terrorist networks. Her memoir offers a gripping tale on how terrorists, and the counterterrorists who hunt them, actually operate in the real world."—Clint Watts, Senior Fellow at Foreign Policy Research Institute and author of Messing with the Enemy: Surviving in a Social Media World of Hackers, Terrorists, Russians, and Fake News

"Bakos takes us deep inside the CIA targeters who were tracking Al Qaeda and the Zarqawists during the height of the Iraq War, showing us both the professional dedication and personal costs of these most quiet professionals."
—Doug Ollivant, Senior Fellow, New America Foundation

"An exciting tale of cutting-edge espionage and a rueful account of how political exigencies can blunt tradecraft's effectiveness."—Kirkus