Operation Dark Heart: Spycraft and Special Ops on the Frontlines of Afghanistan -- and The Path to Victory (Paperback) 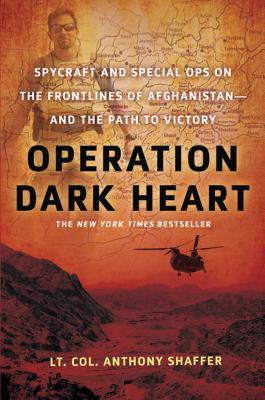 Operation Dark Heart tells the story of what really went on—and what went wrong—in Afghanistan. Lt. Col. Anthony Shaffer led a black-ops team on the forefront of the military efforts to block the Taliban's resuregence. For a moment he saw us winning the war. Then the military brass got involved. He witnessed firsthand the tipping point, when what seemed like certain victory turned into failure.

This wasn't the first time he had seen bureacracy stand in the way of national security. He had participated in Able Danger, the aborted intelligence operation that identitifed many of the future 9/11 terrorists but failed to pursue them. His attempt to reveal the truth to the 9/11 Commission would not go over well with the higher-ups.

Operation Dark Heart made headlines when the Department of Defense bought the entire unredacted first printing. The book's revised second printing includes redactions, which, according to The New York Times, "offer a rare glimpse behind the bureaucratic veil that clocks information the government considers too important for public airing." But most importantly, Operation Dark Heart remains a stirring indictment against military bureaucracy and a culture of cover-ups.

Lt. Col. Anthony Shaffer is the author of Operation Dark Heart: Spycraft and Special Ops on the Frontlines of Afghanistan—and the Path to Victory. He is a Bronze Star Medal recipient and a lieutenant colonel in the U. S. Army Reserve. A CIA-trained senior intelligence operations officer, he has more than twenty-five years of experience in the intelligence community. He is a Senior Fellow and Special Lecturer at the Center for Advanced Defense Studies in Washington, D.C.

“Anthony Shaffer has written a gripping account, filled with amazing detail, of an otherwise secret world. Shaffer has the instincts of a thriller writer and the knowledge and perspective of the professional insider. Operation Dark Heart is a fascinating page-turner.” —Doug Stanton, author of Horse Soldiers

“Takes you inside the espionage world, a labyrinth of secret agencies that do not like to share secrets.” —Army Times

“A nonfiction book that frequently reads like an adventure novel … A fascinating, eye-opening book.” —Booklist

“Operation Dark Heart provides a view of the war that you will not get from the news.” —Bowling Green Daily News

“[Operation Dark Heart] takes you inside the espionage world, a labyrinth of secret agencies that do not like to share secrets.” —Army Times