On the Edge of Survival: A Shipwreck, a Raging Storm, and the Harrowing Alaskan Rescue That Became a Legend (Paperback) 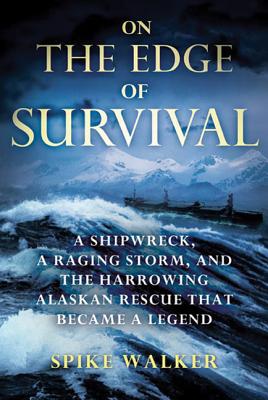 From the acclaimed author whose beloved books inspired the hit television show, The Deadliest Catch, a thrilling, true adventure tale in the Alaskan seas.

In 2004, during a brutal storm, a Malaysian cargo ship runs aground off the coast of Alaska. One of the most incredible Coast Guard rescue missions of all time is set in motion.

In the blinding snowstorm, two Coast Guard H-60 Jayhawk helicopters race to the scene to save as many of the vessel's crewmen as possible, before she sinks or rolls over. Through gale-force winds, all but nine are hoisted by rescue basket to safety. But during attempts to save the last crewmembers, one of the Jayhawks is engulfed by a rogue wave and crashes into the sea. The men who had been hoisted into the aircraft, along with the chopper's three-man crew plunge into the ocean where hypothermia sets in immediately.

Through interviews with all the surviving participants of the disaster and with access to documents and photos, acclaimed author Spike Walker has crafted a devastating, white-knuckle tale of survival and death in the unforgiving Alaskan waters.

Spike Walker spent nine seasons as a crewman aboard some of the most successful crab boats in the Alaskan fleet. While "working on the edge," the crewmen's term for laboring in the brutal outer reaches of the Bering Sea, Spike encountered 110-mph winds, rode out one of the worst storms in Alaska's history, worked nonstop for seventy-four hours without sleep, participated in record catches of king crab, saw ships sink, helped rescue their crews, and had close friends die at sea.  In addition to his crab-fishing experience, Spike Walker has worked in the offshore oilfields of Louisiana and Texas; along the Mississippi River as a certified, commercial deep-sea diver; and in Washington, Oregon, Idaho, and Alaska as a logger. He is the author of several works of nonfiction, including Working on the Edge, Nights of Ice, and Coming Back Alive.

“Deadliest Catch fans will appreciate hearing more about Alaska's dangerous environment, and there is plenty of tense human drama for even the most hardened disaster epic fan.” —Booklist