Tears in the Darkness: The Story of the Bataan Death March and Its Aftermath (Paperback) 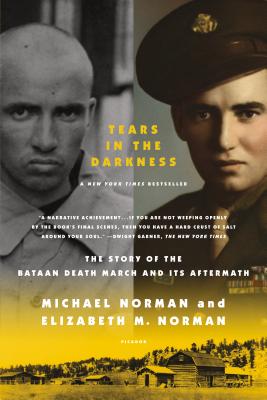 Tears in the Darkness is an altogether new look at World War II that exposes the myths of war and shows the extent of suffering and loss on both sides.

For the first four months of 1942, U.S., Filipino, and Japanese soldiers fought what was America's first major land battle of World War II, the battle for the tiny Philippine peninsula of Bataan. It ended with the surrender of 76,000 Filipinos and Americans, the single largest defeat in American military history.

The defeat, though, was only the beginning, as Michael and Elizabeth M. Norman make dramatically clear in this powerfully original book. From then until the Japanese surrendered in August 1945, the prisoners of war suffered an ordeal of unparalleled cruelty and savagery: forty-one months of captivity, starvation rations, dehydration, hard labor, deadly disease, and torture—far from the machinations of General Douglas MacArthur.

The Normans bring to the story remarkable feats of reportage and literary empathy. Their protagonist, Ben Steele, is a figure out of Hemingway: a young cowboy turned sketch artist from Montana who joined the army to see the world. Juxtaposed against Steele's story and the sobering tale of the Death March and its aftermath is the story of a number of Japanese soldiers.

Michael Norman, a former reporter for The New York Times, teaches narrative journalism at New York University. With Elizabeth M. Norman, he is the author of Tears in the Darkness: The Story of the Bataan Death March and Its Aftermath.

“Deeply researched and finely documented, Tears in the Darkness is written brilliantly in lucid prose. . . . A model of excellence in historical bookmaking . . . I couldn't put it down.” —Philip Kopper, The Washington Times

“An extremely detailed and thoroughly chilling treatment that, given the passage of time and thinning of ranks, could serve as popular history's final say on the subject.” —Richard Pyle, Associated Press

“Balanced, beautifully written . . . Many books have examined World War II in the Philippines, but none of them pack the punch of or are as beautifully written as this compelling volume. . . . A superb book about the unspeakable tragedy of war and the triumph of the human spirit.” —Terry Hartle, The Christian Science Monitor

“A lean, moving account...many books have described the atrocities. Prisoners were starved, beaten, and killed. This is different . . . Powerful.” —USA Today

“A searing narrative [and] an indispensable addition to every World War II collection.” —Bryce Christensen, Booklist

“No aspect of this battle or the infamous march that followed seems to have been overlooked. It is possible to buy volumes devoted to Bataan's nurses, its military chaplains and, in Hampton Sides's best-selling 2001 book, Ghost Soldiers, the men who rescued its survivors. It was not clear that this wall needed another brick. But then you pick up Michael Norman and Elizabeth M. Norman's calm, stirring and humane Tears in the Darkness: The Story of the Bataan Death March and Its Aftermath, and you think: yes, we needed another brick.” —Dwight Garner, The New York Times

“Ben Steele, a young cowboy on his home range in Montana who had enlisted as a soldier in World War II, was caught up in the battle for Bataan in the Philippines, then in the ensuing death march as a prisoner of the Japanese, which he barely survived. Beginning with harrowing sketches of that experience, and in the course of various adventures and misadventures, he continued to draw and paint, and has since become a truly distinguished artist of the West. Tears in the Darkness is a well-told, well-researched, and moving narrative.” —Peter Matthiessen, author of Shadow Country

“Assiduous account of the Japanese conquest of the Philippines in World War II and the fate of the American garrison there... Drawing on the memories of participants on both sides, the Normans provide a careful history of a ghastly episode that still reverberates. Highly recommended for students of the Pacific War.” —Kirkus Reviews

“The battle of Bataan in the Philippines in 1942 resulted in the Japanese taking about 75,000 American and Filipino prisoners of war, America's worst military defeat ever. The prisoners were transferred across the Philippines, and treated horrifically in the process, in what became known as the Bataan Death March. The authors conducted 400 interviews with survivors and have put together an exhaustive narrative.” —Edwin Burgess, Library Journal