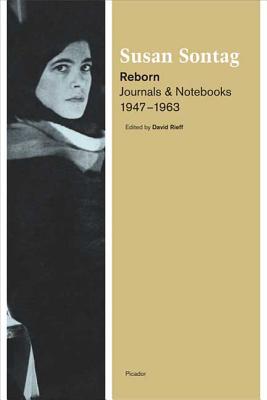 In her journals, Sontag immerses herself in literature, makes lists of self-betterment, leaves for Berkeley at 16, and accepts her lesbian tendencies. Bracing and provocative.

The fragmented story of the birth of a great thinker -- her internal life, her writing life, and the early rigor of her thinking. See Sontag emerge into a complex relationship with her work and her sexuality, and meet some of her greatest influences. Come away feeling not only like you know her intimately, but like you and she are not so dissimilar.

Reading writers' diaries so often feel beside-the-point, but this volume of Sontag's notebooks, following her from ages 16 to 30,  is gorgeous just as a reading experience unto itself.  You don't need to have read Sontag's essays or be deeply familiar with her work to enjoy her journals, although they will be a salve if you've ever found her work 'dry' or 'cold.' Here is the feelingsy flip-side of the intellectual, the ephemera of a genius's day-to-day. High points: Susan Sontag at 16, after just having sex for the first time, discoursing on life. Sontag at 20, married, with a two year old. Sontag in Paris, hopelessly in love with a woman who spurns her. Sontag, reading.

"In the journal I do not just express myself more openly than I could to any person; I create myself."

The first of three volumes of Susan Sontag's journals and notebooks, Reborn (1947-1963) reveals one of the most important thinkers and writers of the twentieth century, fully engaged in the act of self-invention. Beginning with a voracious and prodigious fourteen-year-old, Reborn ends as Sontag, age thirty, is finally living in New York as a published writer.

“A fascinating document of Sontag's apprenticeship, charting her earnest quest for education, identity, and voice . . . What slowly emerges . . . is a sense of Sontag's ferocious will. . . . She wanted to be a writer and would do almost anything to make that happen.” —Darryl Pinckney, The New Yorker

“A portrait of the artist as a young omnivore, an earnest, tirelessly self-inspecting thinker fashioning herself into the phenomenon she will be . . . Her journal is her true first book, the story of a woman struggling with her consciousness.” —Richard Lacayo, Time magazine

“A revelation . . . As do all the best critics, Sontag gave us new metaphors for how to read and see. Fabulously, surprisingly, Reborn shows she used that skill to understand her own pell-mell life.” —John Freeman, NPR.org

“What's fascinating . . . is that the journal reveals and adolescent and, later, a young woman, in whom 'ambition'--in this case, an overpowering yearning to be surrounded by and immersed in literature and culture--vastly outeweighed, and seems to have overpowered, 'sexuality.' As she herself puts it in the last entry of this journal, 'intellectual wanting' was the equal of 'sexual wanting' ” —Daniel Mendelsohn, The New Republic