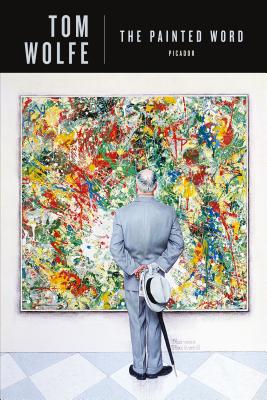 Wolfe's style has never been more dazzling, his wit never more keen. He addresses the scope of Modern Art, from its founding days as Abstract Expressionism through its transformations to Pop, Op, Minimal, and Conceptual. The Painted Word is Tom Wolfe "at his most clever, amusing, and irreverent" (San Francisco Chronicle).

Tom Wolfe (1930-2018) was one of the founders of the New Journalism movement and the author of such contemporary classics as The Electric Kool-Aid Acid Test, The Right Stuff, and Radical Chic & Mau-Mauing the Flak Catchers, as well as the novels The Bonfire of the Vanities, A Man in Full, and I Am Charlotte Simmons. As a reporter, he wrote articles for The Washington Post, the New York Herald Tribune, Esquire, and New York magazine, and is credited with coining the term, “The Me Decade.”

“If you have ever stared uncomprehendingly at an abstract painting that admired critics have said you ought to dig, take heart. Tom Wolfe . . . is on your side. The Painted Word may enrage you. It may confirm your darkest suspicions about Modern Art. In any case, it will amuse you.” —New York Sunday News

“Tom Wolfe is a journalist who always manages to combine an encyclopedic store of inside knowledge with the obstinate detachment of a visitor from Mars, not to mention a brilliant style and incisive wit.” —San Francsico Chronicle

“The Painted Word may well be Tom Wolfe's most successful piece of social criticism to date.” —The New York Times

“The Painted Word is a masterpiece. No one in the art world . . . could fail to recognize its essential truth. I read it four times, each of them with mounting envy for Wolfe's eye, ear, and surgical skill.” —The Washington Post

“His eye and ear for detailed observations are incomparable; and observation is to the satirist what bullets are to a gun.” —The Boston Sunday Globe