Ladies and Gentlemen, the Bronx Is Burning: 1977, Baseball, Politics, and the Battle for the Soul of a City (Paperback) 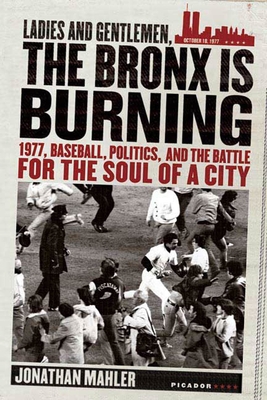 Easily my favorite book on baseball, even though it is largely about the Yankees and I identify entirely as a Mets fan.

Baseball might not be your thing, but the internal animosity tearing apart the 1977 Yankees before sending them to World Series victory is a drama of Shakespearean intensity. Add to that the mid-July blackout and the atavistic battles that ensued, the burning of Bushwick, and a mayoral election for which 'Machiavellian' is hardly an exaggeration, and you've got a thorough chronicle of an implausibly wild year in the city's history, told with enough affection and misplaced nostalgia to make you wish you'd been there yourself, bat in hand, on the field or off.

A passionate and dramatic account of a year in the life of a city, when baseball and crime reigned supreme, and when several remarkable figures emerged to steer New York clear of one of its most harrowing periods.

By early 1977, the metropolis was in the grip of hysteria caused by a murderer dubbed "Son of Sam." And on a sweltering night in July, a citywide power outage touched off an orgy of looting and arson that led to the largest mass arrest in New York's history. As the turbulent year wore on, the city became absorbed in two epic battles: the fight between Yankee slugger Reggie Jackson and team manager Billy Martin, and the battle between Ed Koch and Mario Cuomo for the city's mayoralty. Buried beneath these parallel conflicts—one for the soul of baseball, the other for the soul of the city—was the subtext of race. The brash and confident Jackson took every black myth and threw it back in white America's face. Meanwhile, Koch and Cuomo ran bitterly negative campaigns that played upon urbanites' fears of soaring crime and falling municipal budgets.

These braided stories tell the history of a year that saw the opening of Studio 54, the evolution of punk rock, and the dawning of modern SoHo. As the pragmatist Koch defeated the visionary Cuomo and as Reggie Jackson finally rescued a team racked with dissension,1977 became a year of survival but also of hope.

Ladies and Gentlemen, the Bronx Is Burning is a New York Times Notable Book of the Year, and the basis of the 2007 ESPN miniseries, starring John Turturro as Billy Martin, Oliver Platt as George Steinbrenner, and Daniel Sunjata as Reggie Jackson.

Jonathan Mahler, a writer for The New York Times Magazine, is the author of Ladies and Gentlemen, the Bronx Is Burning and The Challenge: How a Maverick Navy Officer and a Young Law Professor Risked Their Careers to Defend the Constitution--and Won.

"Ambitiously conceived, marvelously told . . . Mahler weaves several stories into one grand narrative of the city's death and rebirth. . . . It all comes back, in living color . . . a tour de force.” —The New York Times

“Entertaining and illuminating . . . It should not be surprising then that Mahler . . . believed a layered account of a single year in the life of the city, 1977, could sustain a book--nor should it be surprising that he was right. . . . A nuanced portrait of this wild year.” —The New York Times Book Review (front cover)

"Ladies and Gentlemen, the Bronx is Burning is a terrifically entertaining, knowledgeable book about one of the most tumultuous years in the history of New York--both on and off the ballfield. Read it and weep, read it and laugh, for the incomparable circus that was our greatest city.” —Kevin Baker, author of Paradise Alley

“Damon Runyon where are you now? Mahler's rollicking evocation of New York in 1977--the year of Son of Sam, the year of the blackout, the year it refuses to Drop Dead, the year, dammit, the Yankees take the World Series--is full of Runyonesque characterizations, energy, and biting wit. Mahler chooses to portray the city from two alternating perspectives, the bleachers and the political clubhouse, and the result is a stereoscopic image in color of a troubled city in search of itself. With characters like Reggie Jackson and Mario Cuomo, Ed Koch and Billy Martin, George Steinbrenner and Jimmy Breslin, the bases are loaded and Mahler smokes it.” —Harold Evans, author of They Made America

“Jonathan Mahler takes us back to one tumultuous year in New York, and through masterful storytelling and rich portraits of the leading characters of the day--Reggie, Billy, Koch, Cuomo, Murdoch, Steinbrenner--reminds us that what defines and ultimately saves a city, in any era, are its outsized citizens. In Mahler's expert hands, they are flawed, fierce, brilliant, bickersome, and as indomitable as the metropolis itself.” —Michael Sokolove, author of The Ticket Out: Darryl Strawberry and the Boys of Crenshaw

“[Mahler] pulls off an expert historical double play by blending front-page political news and sports-page action. The result recalls the ambient atmosphere of the ethnic neighborhoods of Brooklyn and Queens, the natural argot of the precint houses and of the locker rooms of New York just a few years ago. And it's all done with the knowing acumen and street smarts of an old-fashioned beat reporter . . . An informed picture of a bright city in a dark hour.” —Kirkus Reviews

“What a book! What a year! Just when it looked like New York was down for the count--its heart and soul and civic fabric seemingly bankrupt and burned--the city rose, incapable of dropping dead. Jonathan Mahler takes us on a mesmerizing trip down into the dark recesses of racist politics and up into the bright lights of Yankee Stadium, transporting us back to a year that turned out to be not the end but morning at last after the city's longest night.” —Robert Sullivan, author of Rats: Observations on the History and Habitat of the City's Most Unwanted Inhabitants

“You begin this book thinking, reasonably, that Bella Abzug, Billy Martin, Son of Sam and Studio 54 can't possibly occupy the same narrative space, but as Jonathan Mahler's story of New York circa 1977 unfolds, the disparate gritty elements start to resonate off one another. The result isn't harmony--the city has never known such a thing--but rather what a great book about New York should be: a story that's oversized, blaring, impossible, and true.” —Russell Shorto, author of The Island at the Center of the World

“Jonathan Mahler's Ladies and Gentlemen, The Bronx is Burning is an energetic synthesis of a year in the life of a great city in manic conflict with itself.” —Nicholas Dawidoff, author of The Catcher was A Spy