The End of the Story: A Novel (Paperback) 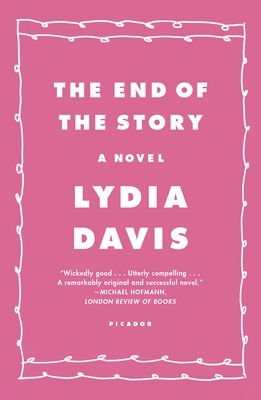 There are few writers I trust more than Lydia Davis, even and maybe especially in this story, which attempts and often fails to organize the bits of debris left behind years after two lovers untangle. It is cold and brilliant like a mirror, and clear like a window. The sparseness and precision of Davis's prose feels lonely, distant, and overly rational -- everything her narrator is to a fault. As her only novel, it is a damn near perfect one.

In this subtle and poetic novel, Lydia Davis's narrator tries to reconstruct a relationship through its demise, but can't quite figure out what is fact and what is fiction. Does her memory tell truth? Did her lover, twelve years younger, ever really want her? And is she going crazy, trying to figure it out?

For anyone who has ever been in love and found it next to impossible to organize their thoughts in the aftermath, for anyone who cannot tell the story in order because it never had an order in the first place, who can’t identify the beginning or the end, or untangle what went wrong, for anybody in love who cannot calm down.

Mislabeled boxes, problems with visiting nurses, confusing notes, an outing to the county fair—such are the obstacles in the way of the unnamed narrator of The End of the Story as she attempts to organize her memories of a love affair into a novel. With compassion, wit, and what appears to be candor she seeks to determine what she actually knows about herself and her past, but we begin to suspect, along with her, that given the elusiveness of memory and understanding, any tale retrieved from the past must be fiction.

Lydia Davis is the author of Essays One, a collection of essays on writing, reading, art, memory, and the Bible. She is also the author of The End of the Story: A Novel and many story collections, including Varieties of Disturbance, a finalist for the 2007 National Book Award for Fiction; Can’t and Won’t (2014); and The Collected Stories of Lydia Davis, described by James Wood in The New Yorker as “a grand cumulative achievement.” Davis is also the acclaimed translator of Swann’s Way and Madame Bovary, both awarded the French-American Foundation Translation Prize, and of many other works of literature. She has been named both a Chevalier and an Officier of the Order of Arts and Letters by the French government, and in 2020 she received the PEN/Malamud Award for Excellence in the Short Story.

“Constructed in brutally perceptive and dazzlingly revelatory prose, this is a stunning work.”—Booklist

“This breathtakingly elegant and unsentimental first novel is about passion, regret, and memory: about the psychology of the spot where recollection and loss intersect.”—Details

“Extraordinary...the risks Davis takes by depriving herself of a traditional structure are enormous.”—Newsday

“[The End of the Story] succeeds in...giving the reader both the story and the painful work that goes into its making, and as such it is not only beautiful, but an extraordinary and very modern achievement.”—The New York Observer