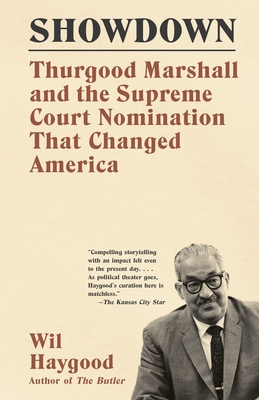 By Wil Haygood
$17.00
In Stock at Publisher - Available to Ship to Your Home

Over the course of his forty-year career, Thurgood Marshall brought down the separate-but-equal doctrine, integrated schools, and not only fought for human rights and human dignity but also made them impossible to deny in the courts and in the streets. In this galvanizing biography, award-winning author Wil Haygood uses the framework of the dramatic, contentious five-day Senate hearing to confirm Marshall as the first African-American Supreme Court justice, to weave a provocative and moving look at Marshall’s life as well as at the politicians, lawyers, activists, and others who shaped—or desperately tried to stop—the civil rights movement. An authoritative account of one of the most transformative justices of the twentieth century, Showdown makes clear that it is impossible to overestimate Thurgood Marshall’s lasting influence on the racial politics of our nation.

Wil Haygood is currently the Boadway Distinguished Scholar-in-Residence in the department of media, journalism, and film at Miami University, Ohio. For nearly three decades he was a journalist, serving as a national and foreign correspondent at The Boston Globe, where he was a Pulitzer Prize finalist, and then at The Washington Post, where he wrote the story “A Butler Well Served by This Election,” which became the basis for the award-winning motion picture The Butler, directed by Lee Daniels. Haygood’s book The Butler: A Witness to History has been translated into a dozen foreign languages. For his work on Showdown, Haygood was awarded a John Simon Guggenheim Memorial Foundation Fellowship and a National Endowment for the Humanities Fellowship. His biographies of Adam Clayton Powell Jr., Sammy Davis Jr., and Sugar Ray Robinson have all garnered wide acclaim.

“A vivid portrait.” —The Boston Globe

“Haygood is a master of the ticktock narrative. He’s equally adept at contextualizing the ‘showdown’ that gives his book its title, explaining how some of Marshall’s detractors hoped that resentment linked to recent urban riots would help them derail his nomination. His prose, meanwhile, is a consistent pleasure.” —Minneapolis Star Tribune

“Gripping . . . [Showdown] provides valuable reminders about the civil rights revolution of the 1960s and the truly mind-boggling horrors that precipitated nation-changing events.”  —The Dallas Morning News

“Compelling storytelling with an impact felt even to the present day. . . . As political theater goes, Haygood’s curation here is matchless.” —Kansas City Star

“Wil Haygood’s engaging Showdown make[s] clear that even if Thurgood Marshall had not made it into history books as the first African American to sit on the Supreme Court of the United States, he would have deserved a place in American history as one of the best, most effective lawyers of his generation.” —The Washington Post

“Important and gripping. . . . A vivid examination of a pivotal moment in the nation’s racial history. . . . With a reporter’s eye for the telling detail, [Haygood] describes with passion myriad horrors spawned by violent racism as well as the numerous examples of courage that inspired Marshall on his journey.” —Richmond Times-Dispatch

“Haygood rehabilitates Marshall with Showdown. . . . [His] decision to focus on this turning point in Marshall’s life proves ingenious.” —The Atlantic

“An inspiring story of America’s moral strength, powerfully told with exquisite attention to evocative detail.” —David K. Shipler, author of A Country of Strangers: Blacks and Whites in America

“Haygood expertly brings [a] remarkable time and place back to life. . . . He’s especially skilled at helping readers understand the personalities and motives of the men—and they’re all men—who sought victory at the hearings.” —Christian Science Monitor

“The choice of Thurgood Marshall was an event that changed the history of America, and this book proves that the changes were all positive.” —President Jimmy Carter

“A window into the history of the civil rights struggle and the path taken by one of its giants.” —Pittsburgh Post-Gazette

"Haygood has made an important contribution to American history by reminding us of this outstanding individual at a pivotal time in black-white relations." —The Missourian

“Showdown reveals the drama of competing currents in our history as they came to a head during 1967—a time like the present filled with rebellion, violence, desperation and social progress.” —Congressman Elijah Cummings

“Haygood does a terrific job of keeping the Judiciary Committee proceedings suspenseful. . . . This compelling aria at last has been sung.” —Los Angeles Review of Books

“An elegant, fascinating, and important tale, rendered with relentless originality and the author’s superb gift of portraiture.” —Michael Beschloss

“The best kind of narrative history. The story line is taut, the characters are complex, and the backdrop is finely drawn.” —Columbus Free Press

“Haygood’s vivid account of the confrontation between Thurgood Marshall and Southern segregationist oligarchs in the U.S. Senate resurrects a civil rights drama often overlooked in histories of the storm of events during the 1960’s” —Curtis Wilkie, author of Dixie: A personal Odyssey Through Events That Shaped the Modern South

“A fascinating account of Marshall’s extraordinary journey to the Supreme Court, a candid reflection on the people and events that shaped Marshall’s journey, and a book that captures the reader’s attention with one interesting anecdote or revelation after the next.” —Finger Lake Times

“You wouldn’t expect a nonfiction book about the usually cut-and-dried process of hearings on a judicial appointment to pack the drama and intrigue of a John Grisham legal thriller. But Wil Haygood’s Showdown does just that.” —Ohioana Quarterly