I Am an Executioner: Love Stories (Paperback) 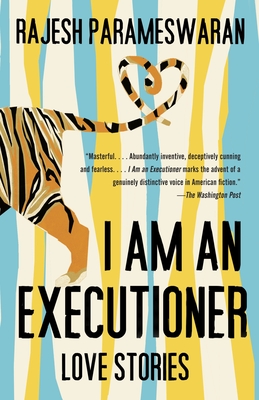 The heroes—and anti-heroes—of I Am an Executioner include a misunderstood tiger whose affection for his keeper goes horribly awry, a woman trying to celebrate Thanksgiving with her husband’s corpse sprawled on their living-room floor, and an ex-CompUSA employee setting up a medical practice armed only library books and fake business cards. Rajesh Parameswaran has a riotous, singular imagination that promises to dazzle the universe of American fiction.

Rajesh Parameswaran’s stories have appeared in McSweeney’s, Granta, Zoetrope: All-Story, Five Chapters, and Fiction. “The Strange Career of Dr. Raju Gopalarajan” was one of three stories for which McSweeney’s earned a National Magazine Award in 2007, and it was reprinted in The Best American Magazine Writing. He lives in New York City.

“Masterful. . . . Abundantly inventive, deceptively cunning and fearless. . . . I Am an Executioner marks the advent of a genuinely distinctive voice in American fiction.”
—The Washington Post

“Brightly original. . . . This is a world of many fools, but few villains—a world where tragedy and farce are plentiful but evil is debatable. . . .  For every death or disappearance in this collection, there’s a wink.”
—The Daily Beast

“Beautiful. . . . Hilarious. . . . Parameswaran’s characters, humans and animals both, find themselves puzzled by love and power, devotion and detachment. . . . [These] stories combine narrative brio, ringing voices and beguilingly looped plots. . . . Realist revelation and postmodern speculation proceed in parallel. . . . These are very much stories that make us ‘wonder the universe.’”
—The New York Times Book Review

“Each of these utterly inventive stories is rich and satisfying in its own way. Parameswaran writes by his own rules, with brilliant results.”
—Nell Freudenberger , author of The Newlyweds

“Stories that are savagely funny, stories that haunt and sear and stun, stories so original they defy categorization—above all, stories generously laden with sheer reading pleasure: I Am an Executioner is a brilliant and spellbinding collection.”
—Manil Suri, author of The Death of Vishnu

“Each story is distinct and intricately-crafted, with characters that are eccentric, weird and yet entirely credible. . . . A wonderfully balanced potpourri of morbidity, humour and sensitivity. . . . [A] very impressive debut.”
—Mumbai Boss

“I Am an Executioner gets the pulse racing from word one. [Parameswaran] has redefined the American short story for me. Bravo!”
—Gary Shteyngart, author of Super Sad True Love Story

“Brilliantly unnerving, wickedly funny, and deeply satisfying. These are ferocious stories about the power of love both to save and destroy, and what can happen to us when we succumb to our true animal natures. Rajesh Parameswaran writes with elegance and style and a fiendishly seductive wit that will take your breath away. An astonishingly original debut by a writer to reckon with.”
—Julie Otsuka, author of The Buddha in the Attic

“The stories aren’t experimental so much as they are vibrantly, raucously creative. . . . Like a great poet working in rhyme, [Parameswaran] can employ established forms to startling effect. . . . Fabulously inventive.”
—Capital New York

“[This] debut collection is filled with the voices of astonishing characters . . . whose pitch-perfect stories recalibrate the notion of love and power with dark humor and unbearable tenderness.”
—Walter Mosley

“Intelligent, hilarious, and wildly imaginative. Parameswaran explores with great delicacy that fraught line between provincial life and modern times. There are traces of Chekhov in his writing. These stories have the power to endure.”
—Saïd Sayrafiezadeh, author of When Skateboards Will Be Free