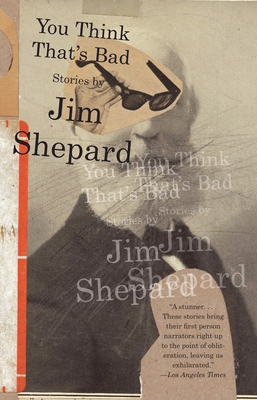 Following Like You’d Understand, Anyway—awarded the Story Prize and a finalist for the National Book Award—Jim Shepard returns with an even more wildly diverse collection of astonishingly observant stories. Like an expert curator, he populates the vastness of human experience—from its bizarre fringes and lonely, breathtaking pinnacles to the hopelessly mediocre and desperately below average—with brilliant scientists, reluctant soldiers, workaholic artists, female explorers, depraved murderers, and deluded losers, all wholly convincing and utterly fascinating.

Jim Shepard is the author of six novels and three previous story collections. His stories are published regularly in such magazines as The New Yorker, The Atlantic, McSweeney’s, Tin House, Zoetrope: All-Story, Playboy, and Vice, among others. “The Netherlands Lives with Water,” from this collection, appears in The Best American Short Stories 2010. “Your Fate Hurtles Down at You,” also from this collection, appears in PEN/O. Henry Prize Stories 2011. He lives with his wife and their three children in Williamstown, Massachusetts.

“A stunner. . . . These stories bring their first person narrators right up to the point of obliteration, leaving us exhilarated.” —Los Angeles Times

“In just a few pages, Jim Shepard’s short stories do the work of entire novels. . . . Short story writers almost never get described as ambitious . . . and yet there’s no better word for Jim Shepard, who thinks big and writes short, without a doubt the most ambitious story writer in America.” —The Daily Beast

“If ventriloquism is a lost art, Mr. Shepard has found it. In these 11 short stories he shows he can move the lips of anyone: a special-effects designer on a Japanese film, a 15th-century French accomplice to dozens of murders, a retired American soldier reeling with post-traumatic stress disorder. Then there’s Mr. Shepard’s realistic staging, nailing entire worlds together with teeming, precise detail.” —The New York Times

“Shepard’s cataclysmic renderings are both terrifying and awe-inspiring. . . . Sublime.” —O, The Oprah Magazine

“You Think That’s Bad is potent enough to stamp Shepard as one of this generation’s short story masters. . . . Shepard’s language is precise, the scope of his research impressive, and he taps obscure historical events to terrific and terrifying effect.” —The Oregonian

“Each one of these eleven stories stands out for its masterly fusion of technique and subject. . . . What voices!” —San Francisco Chronicle

“There are few writers today with more artful gifts for active, authentic description. Shepard doesn’t pick one or two ‘telling details’; he propels the reader through whole bravura paragraphs of them. . . . His fine contrivances of cerebration and feeling can remind one of Richard Powers at his best. And his preference for historical questions, for real people’s big gestures, may help keep American short fiction from falling asleep in the snug little precincts of its usual subject matter.” —The New York Times Book Review

“Each of the eleven stories . . . is heartbreaking and true, and not one is less than perfect. . . . One of the most perceptive, intelligent and fearless writers of fiction in America today.” —Michael Schaub, “Books We Like,” NPR

“So good, so meaty, so brilliant, that you will want to read [these stories] over and over, unearth the subtle notes, try to understand what drives people to do what they do. . . . Here’s the next book that you’ve been waiting for.” —The Pittsburgh Post-Gazette

“I'm hard-pressed to think of any author who can match Shepard for variety of subject matter, or anyone else with such an instinct for balance between a character's emotional conflicts and the task at hand. . . . These eleven stories may be set as far afield as 15th century France and Holland in the not-so-distant future, but each one shares the dark heart of the human condition at its core.” —Scott Ditzler, Kansas City Star

“The ‘contests’ of Doctorow’s historical figures and MacLeod’s melancholy protagonists seem humdrum compared with the travails that occur in Shepard’s kaleidoscopic universe. His genius resides in his omnivorous curiosity and imaginative inventiveness. . . . Shepard’s stories have the strangeness and bell-like clarity of truth. . . . Shepard has realized a vision of literature that is, in its sideways fashion, legitimately unique.” —The Washington Post

“Shepard is the only short-story writer I have ever read whose collections come with bibliographies as a matter of course. . . . Humor is Shepard’s . . . constant; It humanizes his larger-than-life protagonists and helps keep his stories from becoming research papers. Though he has an obvious camaraderie with George Saunders, Karen Russell, and other leading lights of the absurdist-fabulist school, he is ineluctably a realist writer.” —Justin Taylor, Bookforum

“[Shepard] is our leading miniaturist of massive catastrophe, the Jon Krakauer . . . of the MFA set.” —Slate

“Overwhelming, intense, involving—even frightening. . . . Shepard is genuinely taken with his subjects, and he describes their lives in a rich and exciting style.” —Portland Mercury

“Impressive. . . . These aren’t ‘write what you know’ stories, and Shepard gets credit for a wide-ranging collection that wrings poignancy out of every subject it touches, from the search for subatomic particles to the construction of Mothra.” —The Onion’s A.V. Club

“Another masterpiece. . . . Shepard packs so much history and empathy into each story.” —Time Out Chicago

“Time, distance, nationality and profession pose no barrier to Shepard, who combines research with imagination to produce startlingly well-written stories that reaffirm the expansive possibilities of fiction.” —The Miami Herald