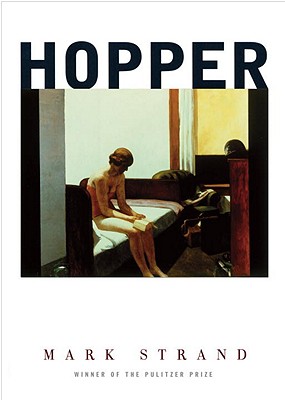 By Mark Strand
$30.00
This book is out of stock indefinitely, unable to order at this time.

Now in rich color, thirty of American painter Edward Hopper’s masterpieces with critiques from acclaimed poet Mark Strand. Strand deftly illuminates the work of the frequently misunderstood American painter, whose enigmatic paintings—of gas stations, storefronts, cafeterias, and hotel rooms—number among the most powerful of our time.

In brief but wonderfully compelling comments accompanying each painting, the elegant expressiveness of Strand’s language is put to the service of Hopper’s visual world. The result is a singularly illuminating presentation of the work of one of America’s best-known artists. Strand shows us how the formal elements of the paintings—geometrical shapes pointing beyond the canvas, light from unseen sources—locate the viewer, as he says, “in a virtual space where the influence and availability of feeling predominate.”

An unforgettable combination of prose and painting in their highest forms, this book is a must for poetry and art lovers alike.

Mark Strand was the author of many books of poems, book of stories, and three volumes of translations. He was also the editor of a number of anthologies, including 100 Great Poems of the Twentieth Century. He received many honors and awards for his poems, including a MacArthur Fellowship, the Pulitzer Prize (for Blizzard of One), the Bollingen Prize, and the Gold Medal for Poetry from the American Academy of Arts and Letters. In 1990 he was appointed Poet Laureate of the United States. He died in 2014.

"Mark Strand looks more deeply into Hopper's pictures than anyone else has before."
--Adam Gopnik

"Strand takes the poet's entrance into the silent world of Hopper with a gift of words that allows painter and poet to become partners in opening the windows of the imagination."
--Wayne Theibaud

"Strand's perceptions are intuitive and visceral. I recommend this strange and wonderful book to anyone interested in Hopper's work."
--Justin Spring, Artforum