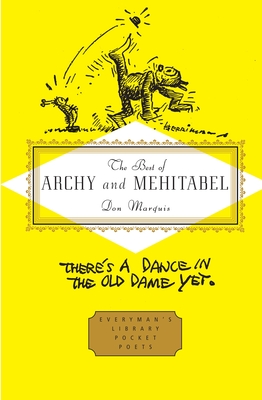 By Don Marquis, E. B. White (Introduction by)
Unavailable, our apologies.
Sorry, We Can Not Obtain this Book at This Time

A selection of the best of the hilarious free-verse poems by the irreverent cockroach poet Archy and his alley-cat pal Mehitabel.

Don Marquis’s famous fictional insect appeared in his newspaper columns from 1916 into the 1930s, and he has delighted generations of readers ever since. A poet in a former life, Archy was reincarnated as a bug who expresses himself by diving headfirst onto a typewriter. His sidekick Mehitabel is a streetwise feline who claims to have been Cleopatra in a previous life. As E. B. White wrote in his now-classic introduction, the Archy poems “contain cosmic reverberations along with high comedy” and have “the jewel-like perfection of poetry.”

Adorned with George Herriman’s whimsical illustrations and including White’s introduction, our Pocket Poets selection—the only hardcover Archy and Mehitabel in print—is a beautiful volume, and perfectly sized for its tiny hero.

Don Marquis (1878–1937) was a journalist and columnist in New York City and the author of several novels, short-story collections, and plays.

E. B. White (1899–1985) was a Pulitzer Prize–winning writer, New Yorker contributor, and author of Stuart Little and Charlotte’s Web.